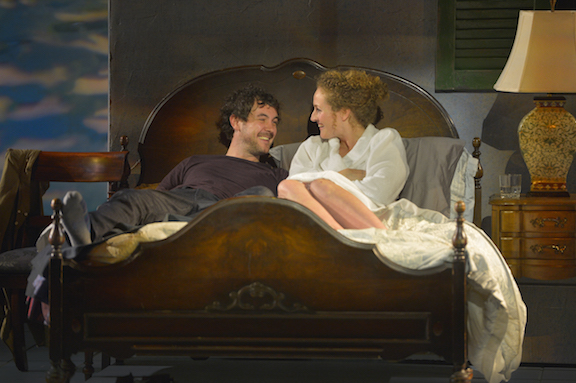 There is something oddly resonant about the title of Tom Stoppard’s new play, which opened at A.C.T.’s Geary Theater last week.

What, one asks upon hearing it, is The Hard Problem?

The phrase was coined by the philosopher David Chalmers and concerns consciousness. In response to the scientific perception of the human animal as a bundle of zillions of tissue cells laced together by zillions of nerve cells, The Hard Problem refers to the problem of how and what is consciousness? How do we so clearly have the sense of something outside the physical body that seems to direct and move that body through thought – something ineffable? And further, how does this heap of matter, the brain, which can be dissected physically and analyzed chemically in its processes, sense, feel and interpret the world subjectively?

Not that Stoppard isn’t into big. He is. But often that very bigness appears on his stage as formal innovation. The Hard Problem, however, is very traditional in its theatrical form. There is a story to tell and the telling moves along in a linear way, with characters entering and exiting, each nudging the plot along, the central characters changing through conflict and ingenuity, or not. The story ends with a tidy resolution, but the resolution is achieved through a barely believable coincidence.

And as one of the characters says, “I don’t believe in coincidence.”

What then, we might ask, is Stoppard asking we believe in? Destiny? Fate? God? Those players – destiny, fate and God – have all appeared on Stoppard’s stage before. And that’s the resolution that Stoppard holds back, although the play’s ending seems to fall on the side of a larger-than-we-are entity, or something, ordering our universe. In any event, the plot is of less importance, it’s the posing of the question that seems to matter.

Hilary is the central character of the play. We first meet her in bed in discussion with her mentor, Spike, who is trying to prepare her for a job interview at the prestigious Krohl Institute for Brain Science. Hilary lacks science chops and the discussion quickly divides into philosophical argument. Spike, gracefully and authoritatively played by Dan Clegg, holds the scientist’s stance: we are what we are, a bunch of cells, and that’s all that we are. Hilary, played by a very grounded Brenda Meaney, believes that subjective beliefs, such as values and ethics, exist outside the human body, in God, if you will. She’s prays to God at her bedside each night. She is praying that the child she gave up as a young woman has found a nurturing home.

Strangely, her non-scientific approach wins her the job. Her boss, Leo (Anthony Fusco), is smitten by what he sees as her innovative thinking, and he hires her over the immensely more qualified Amal, played by the charming Vandit Bhatt, who is interested not in what consciousness is but rather how it functions. What the brain does is what the brain is.

In her job Hilary is able to pursue her beliefs in the form of a scientific study. She does this by focusing on altruism. Are we innately altruistic? Does our competitive and hierarchical society teach us to ignore our feelings to protect and nurture others? In her study she is helped by a young mathematician, Bo (Narea Kang). They are all working for Jerry Krohl (Mike Ryan), who seems distracted from his role as science maven running an institute for cognitive sciences and instead is involved in pursuing a hedge fund. A dissonance that Stoppard asks us to accept unquestioningly, and which is a feature of the playwright’s ranging curiosity and intellect. Despite the play’s sidestepping of the direct issue of consciousness, it offers its audience intriguing dilemmas and provocative arguments.

The scenic design by Andrew Boyce has a central theatrical space, which serves as the cool interior of both the Krohl Institute and Jerry’s office. Smaller side sets wheel in and out for Hilary’s digs and a hotel room in Venice, allowing for fluid changes in setting and atmosphere. Russell Champa’s lighting enhanced the scene changes. And it’s all just as cleanly directed by Carey Perloff.

The Hard Problem continues through November 13 at the Geary Theater in San Francisco. For tickets and information, visit act-sf.org.

Photo: Dan Clegg (Spike) and Brenda Meaney (Hilary) agree to disagree on the nature of consciousness in the ACT production of Tom Stoppard’s “The Hard Problem.”