A garden blooms in Berkeley

I’m not a gardener. Sun plants tend to wilt at my hands, and shade plants fry. But the Secret Garden, a new operatic adaptation of a children’s classic premiering this week at Zellerbach Hall, would inspire all of us to try our hand at gardening, or at the least to dig into the loam of British children’s literature.

A collaborative venture between the San Francisco Opera and Cal Performances, the Secret Garden was composed by Nolan Gasser with a libretto by Carey Harrison and directed by Jose Maria Condemi.

This modern treatment was a far cry from your usual opera. Rather than the naughty spice of Mozart, the huge dramatic arcs of La Bohème or the betrayals and tragedies of Wagner, this careful version portrayed gentle nurturing and personal growth, an accurate portrait of the original.

Frances Hodgson Burnett, writing her classic in 1911, followed a wave of women authors writing of and for young women audiences. Charlotte Brontë wrote of the moors and heaths as places of solace and healing for her heroine, Jane Eyre. In Burnett’s Secret Garden there is a sense of Deity, but without God or Faith, a recognition of the wild magic and living force of nature. It is a slow Female strength that heals the lame and straightens the bent, an implicit vision of hope and health and of the blood that binds us all (think sisterhood, rather than brotherhood).

Harrison’s libretto was simply stated, poetic, and, most importantly, flowed without the choppy quality of many book-to-opera reductions. It was most direct in the first act and towards the end incorporated more of the language of the book.

Nolan Gasser’s score was a complex use of simple themes, shaped to fit the mood of each scene. His knowledge of multiple genres, such as jazz, allowed a protean use of the material, so that the themes, colorings, rhythmic structures and even genres changed without affecting the lovely flow of the music. Some of the surprising colorings included vocal-trumpet duets (such as Martha’s solo), a jazz-raga for the Indian Rajah theme, flute-and-trumpet chases, and a snare-piano duet (Colin’s last solo).

The modest chamber orchestra was exquisitely exposed, something that would strike terror in many groups, but these fine musicians, all taken from the San Francisco Opera Orchestra, turned that opportunity into a collaboration of soloists. Of particular note were many gorgeous flute arpeggios, performed by Stacey Pelinka, a wistful cello solo by Emil Miland, evocative and colorful percussion by Patricia Niemi, Susan Vollmer’s French horn passages, and every careful entrance of William Harvey’s trumpet. Although I didn’t list the other five, that was a credit to the tightness of their ensemble sound, exactingly conducted by Sara Jobin.

But truly, all of this worked as well as it did due to the brilliant video set conceived by Naomie Kremer. We knew we were in good hands when a static wall of flowers, projected on a scrim, subtly began to move while the lights dimmed. Leaves blurred in unfelt gusts of wind, and what we assumed was backdrop became the living lens into which we could project the outsized fears and wishes of children.

Kremer’s facility belies a changing technology and the raising of a bar. But the magical application of that technology is truly an artistic vision in compelling symbolist language. Her scene changes were often windows, growing to fill all of the space, and then shrinking back down into a porthole or train window, while moving scrims allowed relational spaces, each with its own projected sets. An example of the completeness of that vision was the flowery wallpaper, which fluttered just above the threshold of perception as leaves shook and blurred around the patterning.

Besides the subtle and childlike animism of objects, outsize perspectives reinforced the wondrous feeling that we were children. Windows slanted in at the top, as if we could barely press our noses over the sills. Books and toys were huge on the shelves, and the slow arc of a long-roped swing invoked the timelessness of each packed moment of childhood. 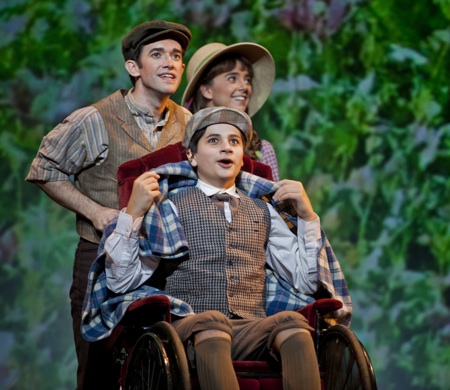 And then, of course, there are the excellent singers. While some of the themes were simple, more often there were long-held notes, odd interval jumps, and unusual instrumental lines. Sarah Shafer did an excellent job evoking both the simplicities and thick discords of childhood as the adolescent heroine, Mary Lennox. Mezzo Laura Krum was a delightful Martha, and Ao Li added a reverberant baritone as the gardener.

Most telling, large portions of the audience were children, and they were riveted.

This premiere continues this weekend only, Saturday, March 9 at 7:30 p.m. and Sunday March 10 at 3:00 p.m. at UC Berkeley’s Zellerbach Hall. For more information, see www.sfopera.com or  www.calperformances.org.