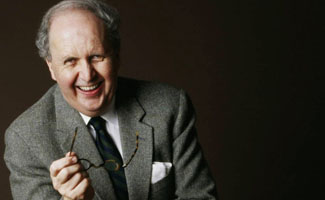 Swiftly moving through time and bagpipes

When asked by a member of the audience how he could write from a woman’s perspective, Alexander McCall Smith answered with characteristic speedy wit and humor. “I don’t know if you noticed,” he said, “but I am wearing a skirt. It helps.”

McCall Smith had entered the Zellerbach Auditorium stage wearing his Scottish kilts and preceded by a piper, also wearing kilts and wailing away on bagpipes, for the opening talk in Cal Performances Strictly Speaking performances.

He was and it apparently does because not only his world-best-selling series The #1 Ladies Detective Agency is written from a woman’s viewpoint, that of the lady detective Precious Ramotswe, but also his series set in Edinburgh, which is written from the viewpoint of the moral philosopher Isabel Dalhousie.

The wildly popular Scottish novelist began by noting that in such circumstances—those of a piper serenading one’s entrance—one usually gave the piper a glass of whiskey, but that all that was available was spring water. One also wonders how many health-minded California restaurants he had been to in the last few days of his Berkeley adventure. Not to mention how many disappointingly pristine cupboards he had opened backstage.

From there McCall Smith moved his conversation through a dizzying and breathless series of segues beginning with publicist Christina Kellogg’s introduction (she got most of her facts right), moving on to talk of the Really Terrible Orchestra—an orchestra he is founder and member of, playing the bassoon, or rather, playing the bassoon up to high D after which he “waits until the music becomes more approachable”—and on to: the tactical practices of the bodyguards of crawling judges in Northern Ireland, issues of etiquette and when to wear white shoes in the United States, the suspension of Citroën cars and its impact on French bank robbers, and Danish writer Karen Blixen and the first lines of novels. And that was only the first 5 minutes of his 45-minute talk.

One of McCall Smith’s favorite opening lines is by British novelist Rose Macaulay: “‘Hold my camel,’ said Aunt Dot, on her way back from Mass.” He points out that “it’s got something for everyone”—a camel, family relationships, and underlying religious issues.

These three things taken more generally—the improbable animal, the web of human relationships, and questions of morality and ethics—describe the worlds that McCall Smith provides for us in his now over 60 books. Which makes sense, given that in the world of serious-minded human effort he was a lawyer and professor of medical ethics. Now professor emeritus at the University of Edinburgh, he is and has been the chair of the British Medical Journal Ethics Committee and a member of the International Bioethics Commission of UNESCO, among others.

His novels similarly center on the radical shift in ethics and morality in small communities, as traditional life throughout the world is disrupted and changed forever. McCall Smith’s characters are involved in the transformation: identifying and reinterpreting what is going on around them and reinstituting morality in affable and humane ways.

His characters celebrate the local and the communal, out of which are born their compassion and, finally, their love of the world. The popularity of his books seems a sign of a human hunger to believe in and partake of these values.

Perhaps it’s best described by McCall Smith himself, in this excerpt from The #1 Ladies’ Detective Agency series: “So it was in Botswana, almost everywhere; ties of kinship, no matter how attenuated by distance or time, linked one person to another, weaving across the country a human blanket of love and community. And in the fibres of that blanket there were threads of obligation that meant that one could not ignore the claims of others. Nobody should starve; nobody should feel that they were outsiders; nobody should be alone in their sadness.”

A version of this article first appeared in the Piedmont Post