Two brilliant young quartets graced the peninsula Sunday, April 3, each with programs that reveled in the old and wandered into the new. And, in uncanny resemblance, each warmed up with an early Beethoven quartet.

The Carducci Quartet arrived from the United Kingdom for an afternoon at Stanford’s Dinkelspiel Auditorium, opening with Beethoven’s String Quartet in B-flat Major, Op. 18, No. 6. This was the last quartet of his first folio, written when he was just 28.

Sunday evening the Harlem Quartet arrived at Burlingame’s Kohl Mansion to perform Beethoven’s String Quartet in D Major, Op. 18, No. 3, which was the first of that same set of six quartets.

But the real likeness was in their willingness to explore. While both of these young foursomes had wide-ranging programs, the Carducci explored the contemporary classical genre, commissioning composer Arlene Sierra to write Insects in Amber for them, while the Harlem Quartet delved into jazz-inspired works by Chick Corea and Wynton Marsalis.

After hearing Sierra’s Game of Attrition in 2009, I was intrigued to hear a new work by this intelligent and playful composer. Attrition was a fight for “survival” in a chamber orchestra, where instruments competed for scarce melodies. But Insects, also biologically informed, studied songs of love instead of war.

This World premiere was based on the mating calls of crickets and figwasps, but Sierra had another target as well. First violin Matthew Denton stood to explain. “This piece was written with us in mind: we are made up of two married couples, English and Irish. The first movement is crickets. I’m the more timid cricket, but with the more beautiful call. And in the last movement we are figwasps and competing again for the females, and I hope that by then you will have figured out who is married to whom.”

Denton entered high and skittery, a Gryllus Integer shyly rubbing his wings. Against unison plucks, he slipped and slurred down the violin, then rose again over bounced bows.  The cello began to answer, as thickly as the violin was delicate, and they ended with single bold notes and gossamer lights.

The middle was densely painted with strange chords and blocks of intense color. Then high harmonies lofted over the thick backdrop, and all four began rapid singing, deep Reich-like sixteenths. The cellist’s deep bowing and her left-hand pizzicato were arresting and insectile.

The figwasps movement had violinist Denton and second violinist Michelle Fleming in a lover’s spat, with harmony indistinguishable from competition in the close unisons. Then glass rods replaced bows for a hollow percussive sound as viola and cello murmured low. The rhythms acquired urgency and an almost mindless excitation, an iambic gallop in close discord. It soon became clear that the first violin had wooed and won the cello, and second violin and viola were double dates.

Sierra combines careful transcriptions of bug love with diaphanous weaves and blocks of color, a suave combination of programmatic attention and composer’s intention. This is a sturdy work and, one hopes, a lasting work.

The Carducci Quartet had edgy technique and emotion-laden phrasing where the Harlem quartet had lustrous chords and super tight unisons. It was hard to compare the sounds because the halls were so different. Where the high-ceilinged Great Hall of Kohl Mansion is bright and reverberant, the low, heavily upholstered Dinkelspiel swallowed the complexity of the waves before they could reach the back rows. But that may all change in 2012 with the much-anticipated completion of a new state-of-the-art facility on the Stanford Campus, the 844-seat Bing Concert Hall.

Though the sound at Dinkelspiel was less supported, that dryness gave more clarity to the line, earning us a sharper look at young Beethoven’s fascination with Haydn’s gentle discourse and Mozart’s elegance.

Quartet No. 6 was graceful, and the Carducci brought out both regal pacing and equality of line, in lovely passing around of the phrases. Denton’s form balanced decorative with sympathetic, while second violin Michelle Fleming added muscle, surging in the lower melody. Her duet moments with violist Eoin Schmidt-Martin were gorgeous, a surprising middle register oomph. Cellist Emma Denton supplied pith and ground and completed those magnetic unisons. 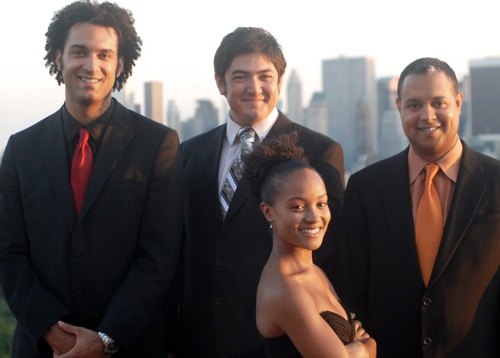 Despite his homage to the masters, Beethoven is unmistakably Beethoven here, emotionally direct and harmonically dexterous.

At Kohl Mansion, the Harlem Quartet conveyed a sense of discovery, adding edge to every moment. Beethoven’s first quartet is full of the drama of late Haydn, and, though imitative in style, presaged full-blown genius.

Violinist Ilmar Gavilán kept a light touch on the top, but infused with sweetness, while second violin Melissa White showed agility and poise. She paired with violist Juan-Miguel Hernandez for rich phrases with tight accords. And Gavilán paired with cellist Paul Wiancko for virtuosic endings to those phrases, high edge dressing low grit.

That cello was so dynamic that the viola was able to assert his own voice instead of helping to row along at the bottom. Hernandez showed a viola’s noble sonority, an indulgent Pizarro to the cello’s forceful Monet.

The Andante was sumptuous. These four have a grand and luscious ensemble sound, and one need never ask for more. But then came the blistering Presto, where White and Gavilán traded electric runs with unlikely clarity.

And Beethoven was only the prelude.

They finished with another jazz/classical crossover, three movements from Wynton Marsalis’ String Quartet No. 1, “At the Octoroon Balls,” invoking an older New Orleans. It is as humorous as it is insanely difficult, perusing rag-time and lushly romantic Delta sounds before settling into Hellbound Highball, a train destined for Hell. That remarkable movement is filled with dopplered train whistles and metallic shrieks all propelled by fierce machine rhythms. The Harlem Quartet was wonderfully concentrated, knitting the programmatic effects and the architecture of the work into a toe-tapping whole. Indeed, their exuberance took much of the sting out of “hell.”

They encored with Billy Strayhorn’s Take the A Train, lining up across the stage as jazz soloists to the delight of the packed audience. And in bizarre coincidence, they sprinkled it with “whips,” those sharp up-bows that Corea calls for as he quotes Piazzolla—and yes, the Carducci quartet encored with that movement from Piazzolla.