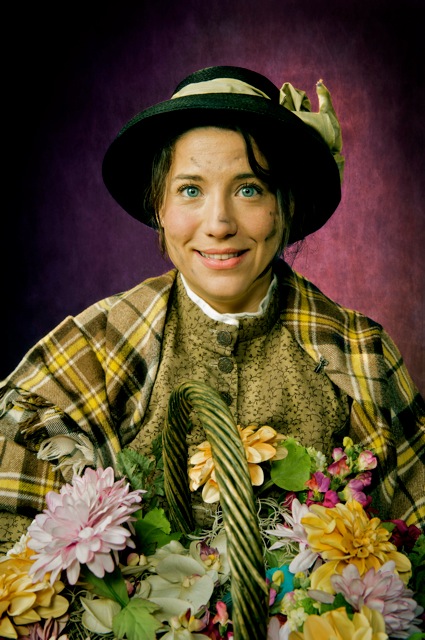 From cabbage leaf to lady at Cal Shakes

In what major theatrical work is a pair of men’s slippers a barometer of emotional temper?  None other than George Bernard Shaw’s Pygmalion, now in a handsome, smoothy-purring production at California Shakespeare Theater in Orinda.  Patrons who know the play only from its Broadway musical incarnation, My Fair Lady, will be surprised.  In the musical, Eliza Doolittle delivers Professor Henry Higgins’ slippers obediently to him when he demands them.

In Shaw’s original, she throws them at his head.

The Broadway version, in other words, makes romance out of the bumpy ride of their relationship, whereas Shaw has something other in mind: social class and what makes it tick.  Oh, love and marriage rear their heads in his play, but only as the complications that screw up a perfectly rewarding friendship between a man and a woman.

Higgins is an abrupt, self-centered professor of linguistics, a fanatical student of the habits of speech that both identify people’s classes and trap them in them.  While he’s slyly jotting notes on various London accents in Covent Garden, he runs into a young Cockney woman named Eliza Doolittle during a rainstorm.  Thinking he’s a police snitch, she brays accusations at him, to which he retorts by calling her, among other things, a “squashed cabbage leaf.”  But she has spirit and ambition–she wants to work in a flower shop–and he’s intrigued, so he takes her on as the subject of a linguistic experiment: he’ll prove his theories by teaching her to speak with such posh polish that he can pass her off as a fine lady at an uppercrust ball.

And so the game begins.  He and fellow linguist, Colonel Pickering, put Eliza through her–or rather their–paces (though there’s no “rain in Spain” along the way).  She seems more a lab rat than a person to Higgins, but he reckons without that spirit of hers.  No dummy, she’s can give as good as she gets, and one measure of the quality of the play over the musical is that when you leave this Cal Shake’s production, you’re not sure where Shaw himself stands.  He puts lots of fine speeches in his characters’ mouths; he’s a master of the sort of dialectic that shakes our assumptions, and in the end we find ourselves balanced on the knife edge of our own judgment.

Director Jonathan Moscone tunes the engine of this smart juggernaut of a play with an expert hand.  I once saw it with Peter O’Toole as Higgins and John Mills as Eliza’s wise working-class philosopher of a father, Alfred Doolittle, and I enjoyed this as much.  Annie Smart provides a rose-themed set featuring big blooms on lime and violet walls–lime for acerbity and violet for passion?  Anna Oliver dresses the cast in splendid period costumes, Jake Rodriguez adds effective transitional music and sound, and when the sun sets over the Orinda hills, Stephen Strawbridge’s fine lighting kicks in.

Among the excellent cast I liked best Sharon Lockwood as Higgins’ mother, L. Peter Callender as Colonel Pickering and the expert James Carpenter as Alfred Doolittle; Carpenter earned deserved extra applause.  They’re all Bay Area treasures, and it’s good to see two other talented but too-little-regarded local players: Catherine Castellanos (Mrs. Pierce) and Nicholas Pelczar (Freddie Eynsford Hill), who never disappoint.  Julie Eccles and Elyse Price are just right as a mother and daughter who learn just what “small talk” is. The deft Anthony Fusco is amusingly smug as Henry Higgins.  As Eliza, Irene Lucio was uneven on opening night, playing too broadly in the first half but quite good in the second, especially in her final set-to with the domineering Higgins.