The brutal and the ridiculous—as art.

It is seldom possible to view works of art in context. We need to allow for the mores and prejudices of their time. That was painfully apparent at Zellerbach Hall last weekend, where the denigration of women was the context, if not the heart, of the Castleton Opera Project.

Thursday and Friday they mounted The Rape of Lucretia, a two-hour rape dressed in gorgeous music and beribboned with moving poetry. Friday and Saturday they tried their hand at Albert Herring, an opera buffa wherein a young man comes of age and loses his innocence. There, too, women were portrayed unsympathetically or peripherally. That said, these two operas contained some of the most beautiful unison writing since Strauss, and each was given a dynamic reading by 12 members of the Berkeley Symphony succinctly conducted by Lorin Maazel, retired from the New York Philharmonic. 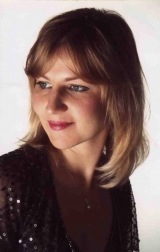 Benjamin Britten, the author of these two operas, was credited with recreating English Opera after his portrayal of the huge pressures of a small town in Peter Grimes. After that success he went on to compose The Rape of Lucretia in 1945, using a libretto by poet Ronald Duncan, but set for chamber orchestra to avoid the extravagance of regular opera, a necessity in post-World War II England.

Both stories open with a search for a woman of virtue. In Albert Herring no young maiden is worthy to be crowned the Queen of May in a straitjacketed English village. And in Rome under Etruscan domination Lucretia is the only woman found to be true to her soldier husband. That virtue inflames the Prince of Rome, who rapes her. But that is apparently not enough to create tragedy. So she proceeds to kill herself, lest others think her impure…and conveniently sparks an uprising that sweeps the Etruscans from power.

Sprinkled with politics and heavily overlaid with religion, this could still have been a powerful investigation into human nature, pure and perverse. But the thinly realized characters and covert misogyny worked against it.

But let’s step back to Britten’s era. To be gay, as he was, in 1945 England was to court shame and a jail sentence. Adding to that were the all-male public schools, where young boys taken too soon from their mothers nurtured a culture contemptuous of women.

Taking that into account, one might well enjoy the music, some of which is sublime. Vale Rideout sang the role of narrator/chorus with such diction that supertitles were unnecessary. And the poetry glowed in his quieter solos:

“Here the thirsty evening has drunk the wine of light.”

His duets with the female narrator, Arianna Zukerman, were arresting, particularly on the falling thirds and chromatic climb of the introduction, a slow unison motif that returns at the very end. Zukerman’s “She Sleeps as a Rose upon the Night” was almost too lovely with alto flute and bass clarinet, performed by Berkeley Symphony principals Emma Moon and Roman Fukshansky.

Singing the title role, mezzo Ekaterina Metlova was a standout as Lucretia. One could detect a Russian training in her sound, with breaths barely perceived and a velvet-and-thistle richness to her words.

Seeking relief in the following night’s opera, I was startled by the musical pettiness of the portrayals. Village doyenne Lady Billows was forced into a high tessitura that had her screeching, while her maid, sung by Kristin Patterson, was kept growling at the bottom of her mezzo range. Only Sid, the “bad boy” who leads Albert astray, has much musical line—or depth of character. And that part, sung by baritone Adrian Kramer, was a treat.

Albert Herring isn’t exactly funny. It’s not deep. And it’s an hour too long. So the question is, why does it keep coming back? Because of the sublime harp motifs (Wendy Tamis), or the lovely flute and clarinet solos? Because the subtext is coming out of the closet?

Or simply because it trashes women, and there always seems to be a market for that?

Photo top is of mezzo-soprano Ekaterina Metlova, bottom of the cast of Albert Herring, courtesy of F & E Schmidt. 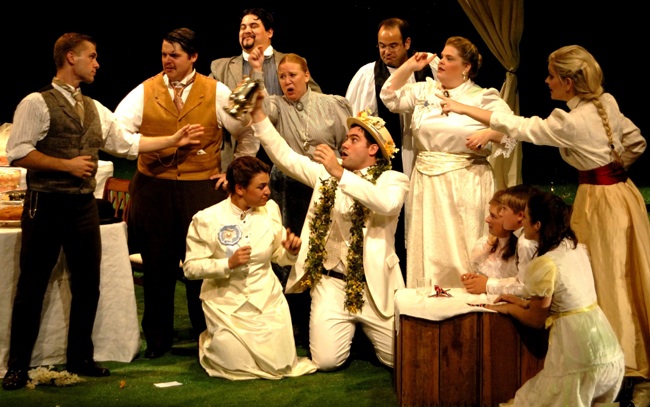