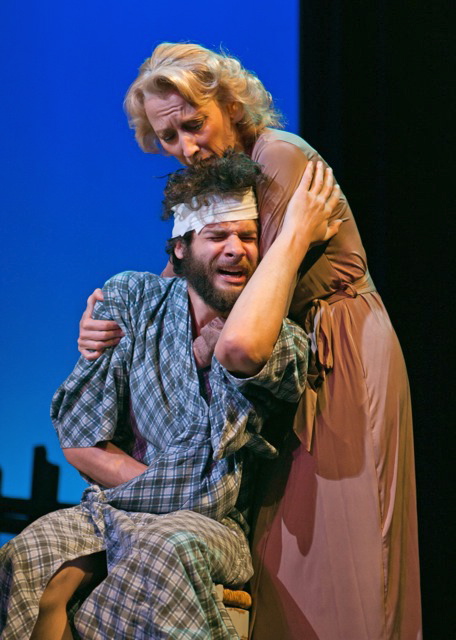 What’s in a name?  “A rose by any other name would smell as sweet,” Shakespeare’s Juliet claimed.  Would a classic drama by any other name play onstage as well?  You can find out at San Francisco Playhouse, where writer Aaron Posner has renamed The Seagull by Anton Chekhov Stupid Bird and rewritten it as a contemporary drama to boot.

How does it smell?

Not bad, it turns out.  The smirky rebranding of the work is an act of sophomoric hubris, I think, but Posner is a talented guy, and I enjoyed much of SF Playhouse’s production of his play.  I wanted to edit scenes now and then (I always want to edit Chekov, too), I didn’t think the actors-address-the-audience moments always worked well, and I found the abrupt ending dismaying, but the show, directed with engaging intelligence and panache by Susi Damilano, has grace and humor.  Posner has done a remarkably fine job of finding modern equivalents for the circumstances of The Seagull, and for the inner states of its denizens.  Everyone on stage is just as unhappy as in the original (the line, “I’m in mourning for my life,” straight from Chekhov, expresses the melodrama well), but this new version, which takes a refreshingly un-worshipful attitude toward the Russian master, is wonderfully unstuffy.

It feels like a cross between Chekhov and Robert Altman, and you could do worse than to discover The Seagull through this witty take on it.

About that seagull, it’s pretty universally agreed that the damned symbolic bird is not one of Chekhov’s finer choices.  It shows up in Posner’s play, but there was likely no way he could have eliminated it, so there it lies, bloodily dead.  Fortunately it’s soon forgotten as people lose at love, fail at suicide, compromise.

This one takes place, as does The Seagull, at a country house, in the Berkshires perhaps or maybe the Sierra foothills.  A successful but aging film actress, Nina, self-centered and willful, is visiting with her writer/lover, Trig.  Her touchy son, Con, puts on one of his plays for them, starring Nina, the young woman he loves, but the play is a disaster.  Too bad for Mash, who loves Con, while local guy, Dev, loves her.  Nina falls for Trig and…well, you get the idea: a chain of unrequited love, observed by Emma’s melancholy father, Sorn, the gently bewildered touchstone of the tale.

The mix up sounds like the stuff of farce, but though everyone behaves farcically at times–the play has lots of laughs–it’s not a farce but a sad and sympathetic view of the human comedy.

The cast fills seven roles pleasingly.  Perhaps the most vivid is El Beh, as Mash, whose amusingly ironic songs are a highlight of the production.  Carrie Paff is very strong as the imperious but vulnerable Emma, and as Dev, Joseph Estlack quietly steals scenes.  Adam Magill brings a febrile quality to the role of the frenetic Con, and as the old man, Sorn, Bay Area veteran, Charles Shaw Robinson, has never been better.  Johnny Moreno expertly conveys a hint of pompousness to the writer, Trig, and Martha Brigham nicely embodies the longing young actress, Nina.

Stupid Bird plays on Post Street until May 2nd, followed by Lauren Yee’s in a word and Richard Dresser’s Trouble Cometh.  For tickets/information call 415-677-9596 or visit www.sfplayhouse.org.