At last Friday’s concert by the Cypress String Quartet, gray-haired connoisseurs shared Herbst Theater with hundreds of enthusiastic middle and high school students. The “Call and Response” program of Dvorak, Schubert and contemporary composer Jennifer Higdon makes a fascinating story. But the back-story is even better.

The Cypress Quartet currently tours all over the world and has just released their 14th CD. Based in the Bay Area, we are fortunate to have abundant opportunities to hear this world-class foursome. And their ties to home have also resulted in a commitment to opening young people to the arts and building future audiences. 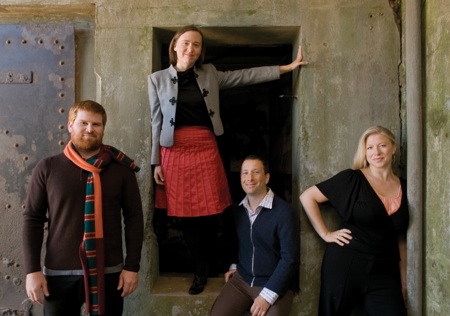 To that end they have set up shop at over two dozen Bay Area schools in the last several months, giving free lecture/demonstrations on classical music and the string quartet, nineteenth century German romantics, and how contemporary composers are inspired by older art forms.

I caught up with them at a recent visit to Berkeley High School, where they sat in on a harmony class to explore themes of love and loss, and then looked at music as a vehicle for raw emotion. The students had been exposed in advance to an educational packet of questions and sound samples from the Quartet, so they had an opportunity to think about music and emotion, and the juncture of music and text. The samples quoted popular love songs (the Beatles and Adele), German lieder and sung prayers from four religions, before entering more abstract forms.

The Quartet sat down and began to play Schubert, opening with a delicate and optimistic romp, then got a little steamy, and then a little torrid, and lightened up again into soft runs with a lingering touch.

Many of the kids had never heard live performance, and in the close confines of the class it was unbelievably resonant. Their simpatico was also palpable, and drew us in like our own forgotten hunger to understand and be understood. First violinist Cecily Ward brought an impassioned lightness, a high and pure edge that cleansed the air. Cellist Jennifer Kloetzel supplied mountain ranges of vibration, a language that breaches thin skin. And violinist Tom Stone and violist Ethan Filner took the inner harmonies, painting airy scapes or blooming into thickly cloistered forests of sound.

Afterwards, Kloetzel spoke about their commissioning project. “When we first got together, 16 years ago, we practiced six hours a day, seven days a week, and soon began to find lines from one composer appearing in another. We were noticing that composers were not out there working in an ivory tower or vacuum, but were influencing each other. And so we came up with our ‘Call and Response’ program, an older work informing a fresh composition.”

She went on to describe Dvorak’s set of love songs, The Cypresses, which he wrote to a 16-year-old actress that he was tutoring (he was 24 at the time). “What would you do if you fell madly, passionately in love with someone… and then were rejected?” Dvorak wrote these twelve short movements based on a set of poems by Moravian poet Gustav Pfleger-Moravsky. While they are without text, the music is faithful to the moods. “And seven years later he married her younger sister. That’s one way to keep her in the family!”

They played several passages, stopping to ask the students what they felt from the music. The babbling of water, evening, a summer day, butterflies, squirrels, and wind in the trees were suggested, ciphering the universality of a Bohemian composer. After demonstrating a moment of harmonic transition, Kloetzel continued, “Dvorak was a master of harmonies. That was a ‘harmonic twist,’ what my teacher called ‘harmony by brute force.’”

Since the Cypress Quartet had originally taken their name from this set of tone poems, they decided it was time to use them as a basis for this year’s commission, and turned to Jennifer Higdon, one of today’s most-performed living composers. In 2003 Higdon wrote Impressions for the Quartet, and was willing to be invited back, this time with a work for quartet and mezzo-soprano, setting five poems by W. S. Merwin. 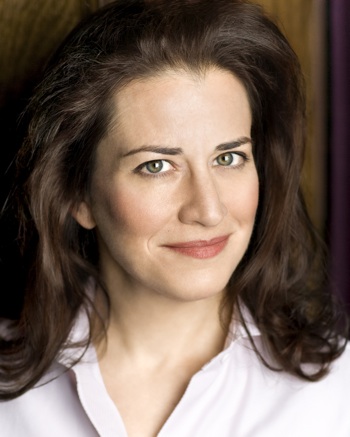 The fifth visitor introduced herself as Christine Brandes (who Piedmont Post readers may recognize as Nero in West Edge Opera’s recent thriller) and then read the first poem, with its themes of mortality and aging inspiration.

Cello and viola shared low, paired notes with a Scottish complexion, then let the violins soar over. Brandes joined in with modern intervals and an ancient melancholy, delivering the layered text with a smooth and succulent sound to a room of rounded eyes.

An hour later they were packing up the second of that day’s three stops—they were at Longfellow Middle School at 8 a.m. and then on to a noon program at the downtown Berkeley Public Library! In the last three months they have quartered San Francisco and the Peninsula, Marin and the East Bay to deliver their programs, and followed up with a promise to the students: that each of them could hear the final April 19 concert for free. To that end, the Cypress Quartet’s active fundraising board rented 15 bio-diesel buses to bring students to Herbst.

…and then the culmination.

At Herbst, in this final week before the old theater is closed for a year of retrofit and repairs, hundreds of students did appear, and the restlessness one associates with younger crowds was replaced by rapt attention. They had arrived an hour early to hear Higdon being interviewed by Kai Christenson, a popular musicologist who interprets the programs at Kohl Mansion. Higdon spoke about her favorite composers—John Lennon, Debussy, Ravel and the Dixie Chicks—and about her inspirations. “Yes, Kai, my music emerges in my dreams. It’s ridiculous. I gotta get a life!” Then we settled in for the complete cycle of the Cypresses.

There were high, sweetened harmonies and insistent viola notes, lush low chords and sighs like the bending of trees. Throughout, Ward bowed a lyrical vocal line, from melancholy to Bohemian rural, and the other three added chords and rhythmic underpinnings. At one point a middle school student began kicking the seat in front of him in absent-minded timing with that rhythm, much to my delight.

Brandes came onstage, and they followed Dvorak with the World Premiere of Higdon’s In the Shadow of Sirius, a cycle of six movements to five poems, with the first poem repeating itself at the end for a very different treatment.

The vocal line was difficult, from meandering notes to awkward leaps, but given a brilliant reading by Brandes. The instrumental lines flowed easily, by contrast, with Celtic drones and lush accords. They ended the last poem with high harmonics replacing the first movement’s undertow of viola and cello, a lovely re-setting of the pensive text.

Their program, and their thirteenth year of commissioning, closed with Schubert’s Rosamunde Quartet and a lively Higdon encore, “To the Point” from Impressions.

Then students stormed the stage to get their programs autographed.