Holding our feet to the fire…

For the last sixteen years, Goat Hall Productions has hosted the “Fresh Voices Festival,” a celebration of new works written expressly for voice in opera and musical theater. This year, their seventeenth, they displayed pieces by eight composers in performances in Vallejo, Albany and San Francisco. Titled “Feet First Into the Fire,” these works ran a gamut from playful to painful, and each brought a little light or even humor into some difficult themes, from birth mysteries to love notes, and from eating disorders to caring for the aged. This was not Love or Betrayal, the usual fare of operas. This was the other Big Stuff: birth and death and home and hearth, issues that are often thought of as women’s issues, as women often carry the brunt of the joys and burdens associated with these themes.

Artistic Director Harriet March Page teamed up with Music Director Frank Johnson and composers Mark Alburger and John Bilotta for some works so fresh that the ink was still wet along with selections from larger works.

At last Sunday’s concert, Aug. 27 at the Community Music Center in SF, they began with a poetic and chilling work, Helena Michelson’s The Mysteries, where she set the poetry of Hilda Doolittle (more familiarly know as HD) to a platonic and sere landscape of dissonant piano chords. Frank Johnson was the pianist, both here and throughout.

Soprano Teresa Foss brought big top notes and a chocolaty buzz of vibratos, meshing finely with Meghan Dibble, whose mezzo added clarity and depth. Jamie Samantha Lee gave them an alto’s spring and structure, and the three produced chords that were challenging and tangential to the piano line. The progressions were measured, compelling and at times ghostly, a strong vehicle for poems about the ancient Eleusinian Mysteries. In HD’s poetry, she links the Minoan-derived cult of rebirth and death and the cycle of the seasons to the Christian communion. Weirdly reverberating!

This was followed by some comic relief, Bilotta’s The League of Minor Characters, in which he set a group of four poems about mythical heroes or superheroes to music. Kathleen Flenniken’s thought-provoking poem on what it is to be a hero was sung by Jacqueline Goldgorin in a powerhouse soprano, long-held top notes taking up much of the air of the intimate theater, as the piano supplied playful trickles and a restrained tether.

Then Foss followed with the musings of Nancy Drew, sunny intervals and business-like major scales turning wistful as she wishes that she were less brave and confident and could “…fall for a cad.”

Goldgorin returned as a Cinderella bored to tears and hot for huntsmen, and Foss as Lois Lane wishing that Superman had moments of weakness. Those last three poems were by Ron Koertge, clever and funny, and the piano obliged with brightly defiant intervals, a longing Cinderella waltz, and dreamy piano “what ifs” – with Kryptonite as a lady’s date rape perfume!

Going to the heartland, and without humor to gild its message, was the moving The Way Home by Robert Denham, in which a woman and her mother reminisce as they drive to an old folk’s home. Alto Jamie Samantha Lee returned as the daughter with big intervals against a piano’s gentle repetitions, “I feel sick to my stomach,” she sang. “I don’t know if I can do this.” Goldgorin sang the role of her mother, flowing and melodic in her parts as the piano gently stuttered up or down a small stair of chords. “Where is she taking me? I feel just like a child…Have I done something wrong? Sweetheart, let me touch your hair.” This was the big guns, and those of us who have cared for a parent knew its truth.

Adding a note of leavening were five songs from Aging Grace by Dikkie Schoggen, with aging singers proudly showing off their stuff. Foremost was director Harriet March Page, singing “Move over, old lady,” into a mirror with spot-on acting. And Phoebe Anne Thomas Sorgen led a blues number with vamps and sighs, “I feel like a brazen hussy, all wrapped in a brown paper bag.” Goat Hall put this entire opera on last year, and included this selection because of its relevance.

The most political was Mark Alburger’s 2017, with twelve short songs about the twelve days from Barack Obama’s farewell address to the nation to the Women’s March on Washington, the day after Trump’s inauguration. With texts taken entirely from the public record, this was a chilling document of a reality TV star waging a personality war on the delicate balance of world agreements and trade. Obama’s nobility and Trump’s threats and overt untruths were arrayed over sleaze and furor, and finely portrayed by soprano Valerie Salcedo, mezzo Ryann Swale, baritone Patrick Brancato and Alburger himself as Trump (performed with meaty gusto).

Alburger’s songs were punchy with broken rhythms and big leaps, a wondrous mix of Stravinski and Wagner and rock, and then gentled with Obama’s farewell, sung by Brancato with dream-like luster and soft harmonies.

We had another chance to hear Alburger in two selections from Cats, Dogs & Divas, where he sets texts by Page. Here Brancato and Foss strutted and belted (and Foss was a solid belter in her lower register) with staccato rhythms and soaring whole-tone arpeggios. Page’s lyrics were poignant and brilliant, and in fact the generally excellent texts – and their clear delivery – were a big part of what this festival unusual.

And then another emotional blockbuster: Doug Brandt’s Our Little Secret cast light on bulimia: the shame and hurt that can combine to lock secrets inside of us. Meghan Dibble, Valerie Salcedo and Ryann Swale sang four accessible and gripping songs from the larger work, flavored with flamenco, gospel, pop and even French cabaret. Their texts revealed ancient abuses and everyday torments, jarring in their commonplace musical settings. “Shut your mouth and stop your crying or I’ll give you something to cry about!” was set to slow sugar-pop harmonies, and “How on earth, Mother, could you have left me… with him?” was a ballad treatment of the quiet destruction of a child’s world.

Johnson, who accompanied throughout, also had his own work on the program. In “Defiled Is My Name,” Meghan Dibble sang the lament of Anne Boleyn as she waited to be beheaded. Her voice was high and honeyed as she asked Death to rock her to sleep, notes repeating and then stepping down as piano chords repeated once and stepped softly up. Melancholy and moving, it underlined issues of injustice and powerlessness, even for a Queen. What was most disturbing about this, and the other issues touched on in this program, was how relevant they remain.

Photo below of “2017” by Mark Alburger, with (from l) Patrick Brancato, Alburger, Valerie Salcedo and Ryann Swale; photo by Brian Walker. 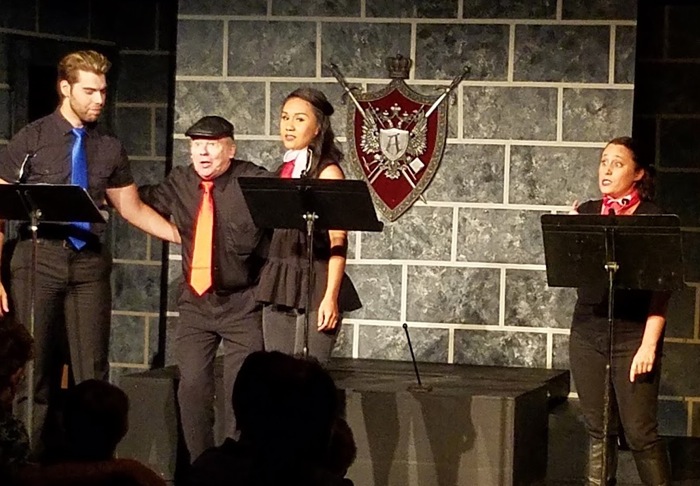