There is a timelessness to great music. That timeless quality was immediately apparent at San Francisco’s War Memorial Opera House, where Giuseppe Verdi’s teasing textures, joyous dances, divine progressions and hair-raising harmonies were faithfully rendered by the SF Opera Orchestra under the baton of Nicola Luisotti.

In creating that great music Verdi mirrored the timelessness of the human heart, with suddenly blazing love and desperate hope and the shock of betrayal and the slow tread of death, all sharply realized last Saturday in his opera, La Traviata. 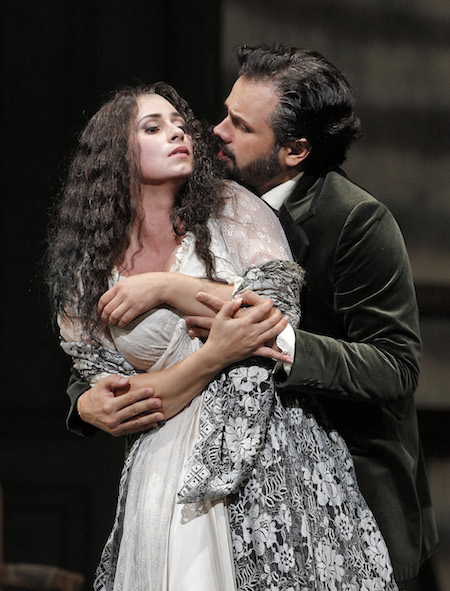 But there was something else that was timeless and that was troubling: the imbalance of social power, fathers who destroy their sons, and the mistreatment of women down through the ages. Even as the opera’s characters ultimately find their way to penitence  and forgiveness and redemption, this “timeless” story, embedded in a tradition of disempowerment and overt sexism, left some of us wondering if there is any real hope for our species.

And what was most disturbing was how familiar are the arguments that disempower, and their parallels to today’s lack of political discourse or resolution.

Verdi wrote this opera in 1853 based on Alexander Dumas’ banned play, and his early audiences were shocked that at its center was a sensitive portrayal of a young courtesan. But the clarity of that courtesan’s emotions as she probed her heart while withstanding the shame of social mores quickly won the opera its success.

Luisotti raised his baton and began the overture, with the upper strings creating a soft atmospheric chord progression. It slipped into the air like the first day of fall, enveloping us in soft leaves and a coming chill, and one could not help but be reminded of the gripping progressions Verdi used in his Requiem. With a slow oompah of basses, the music turned to stately dance and the violins minced and cooed. The curtain rose on John Copley’s magnificent stage, with raked and over-sized sets and masses of mahogany woodwork and immense paintings of fleshy nymphs. In the drawing rooms and bordellos of Paris, opulence was apparently unchecked by cholera or Revolution.

This production starred two new leads. Romanian soprano Aurelia Florian sang Violetta, the lighthearted courtesan who takes a leap of faith into love, with a voice that was acrobatic enough for this role but still with some of the huskiness of a mezzo. Opposite her was Brazilian tenor Atalla Ayan as Alfredo Germont, her young and impetuous suitor. And his voice was similarly on the dry side, but with top notes that really popped, which made them match well in some lovely duets.

And speaking of duets, this is where Verdi is fiendishly clever. While Ayan is singing that love is mysterious and noble, a torture and an ecstasy, Florian sings that she loves lightly and he should forget her. But her buttery tones and his open soulfulness match in such sumptuous harmony that we know they are really singing the same old tune.

Alfredo’s father, Giorgio Germont, was sung by Artur Rucínski in a ringing baritone, the voice of a forbidding father, and he was so effective that there were boos and hisses in the audience! The clever use of text – from a brilliant libretto by Francesco Maria Piave – was again seen in the father’s entreaties, where he sings of God’s will as he works to break up the happy couple, and in the next stanza sings of maintaining the family honor to deepen his thrust. Ah, poor God and honor. So many scoundrels have invoked you!

And the music has its own clever allusions. In one of her last arias, Florian sang, “Addio, del passato bei sogni ridenti…” (Farewell to the happy dreams of the past). But the melody is from a 15th century Ladino song, “Adio, querida,” goodbye, my dearest. I assume Verdi used this melody knowing that audiences would appreciate it, but one never knows. Maybe a Jewish minstrel crossed his path!

The delicacy and exuberance of this music and the deep portrayal of an impossible choice make this period staging of a powerful work well worth seeing! See sfopera.com for tickets and information. 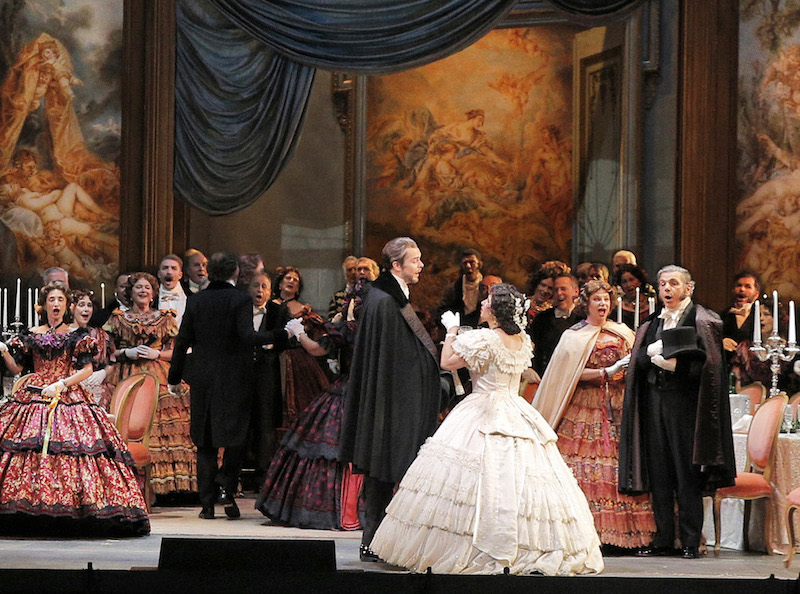