The Lamplighters, a venerable Bay Area institution adept at the high camp and broad humor of Gilbert and Sullivan, proved last weekend that they could branch out of their comfort zone and put their signature on grand opera. Their production of Die Fledermaus (The Bat), seen last Friday Feb. 22 at Yerba Buena Center for the Arts, was accessible and tightly executed, largely thanks to a new translation into English by David Scott Marley, known to Berkeley Opera audiences for his Riot Grrrl on Mars and Manga Flute.

This comic opera, written by Johann Strauss II, was a smash when it premiered in 1874. It parodied Viennese society, the frivolous upper class, and the institution of opera itself, and it did so with panache. Lamplighters Music Theatre is an adroit vehicle for those timeless barbs, combining the war of the sexes and pratfalls of pride into a not-so gentle revenge. 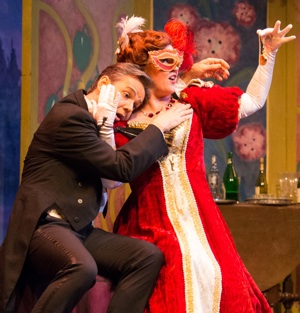 Heading the cast as Gabriel von Eisenstein was Martin Lewis, a popular fourth grade teacher at Piedmont’s Wildwood School who is returning to the stage after nine years of absence. Despite that absence, his clear voice and droll acting abetted a polished performance. Interacting with his shallow-but-engaging character were several poles of this complex plot, helpfully differentiated by vocal type. Coloratura soprano Maya Kherani sang the role of Adele, the young and flirtatious chambermaid. Kherani, who was brilliant in Opera Parallele’s recent Ainadamar, complemented high trills with delightful overacting, and reached for the dizzying runs of the “laughter” aria. Opposite her, Jennifer Ashworth played Rosalinde, a mezzo and Eisenstein’s now-chaste wife, projecting the memory of playful sexuality with stage presence that included perfect timing. Her voice, all butter and bubbles, was suave in the lower reaches with lovely “pops.”

Stealing the stage whenever she sang, alto Anna Yelizarova inhabited the pants role of Prince Orlovsky, her warm Russian sound at odds with her aloof power.

Complementing these threads were Mark Kratz, a chestnutty tenor who plays a love-lorn tenor, and baritone William Neely as Dr. Falke, the manipulator of the farce and a character that presaged the arrival of Freud’s psychoanalysis into Vienna.

Conducted by Maya Barsacq (and at all of the earlier performances by George Cleve), the orchestra found its dance groove in the off-kilter weighting of waltz and the madcap of polka, all strung together with a score of humor and delicacy, and opening with one of the best known—and much parodied—overtures in the biz.

What sets this production apart from the usual opera-as-spectacle of the larger houses is its emphasis towards musical theater, where each character must ably sing, act and dance, the demanding “triple threat” of operettas. And, unusually for opera, there was as much emphasis on acting as on the demanding arias, thanks to excellent stage directing by Barbara Heroux. This even-handed and engaging approach was clear in the second act, when the curtain rose on a ballroom and a chorus of 26 first-rate singers, who later proceeded to dance with skill, some obviously professionally, in the complex and mesmerizing choreography of Tom Segal.

If you have not had the fortune to enjoy this comedy, you can still see the Lamplighters at their most madcap, when they host an H.M.S. Pinafore Sing-along at Walnut Creek’s Lesher Center for the Arts on Friday, March 21 at 8:00 p.m. For tickets and information, see www.lamplighters.org. 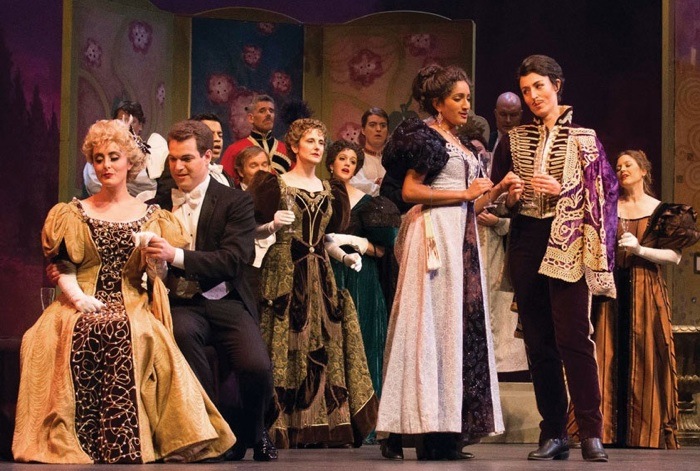