Exploring music of the night.

On Sunday, the Left Coast Chamber Ensemble explored “Night Music,” shuttling between the present and Schoenberg’s last fling with nineteenth century Romanticism. Held in Mill Valley’s cozy 142 Throckmorton Theatre, that concert was an absolute treat. Artistic Director and violinist Anna Presler created a varied program with a twist, works that spoke of the moods and magic of the night, from open-eyed dreaming to the evening of the soul.

The Left Coast Concert was no less passionate than a similarly constructed program from the Berkeley Symphony’s, held a few days prior, but their sound more than filled their small hall with six musicians instead of the seventy that flailed away in cavernous Zellerbach.

Arnold Schoenberg’s Verklärte Nacht was intimate and dreamy, alternating clear voices with tight accords. Based on a poem by Richard Dehmel, Schoenberg traversed fragility and darkness to give feelings a patina that, in 1899, was already nostalgic. It was a search to unite the harmonic power of Brahms with Wagner’s chromatic beauty, an ultimate expression of Romanticism – which he later abandoned for atonality and Expressionism.

Viola and cello shivered a low chord, then slowly built into great crests. The balance of the sextet was lower than a standard quartet, and luscious with two violins, two violas and two cellos. It was denser, also, with high and low cello parts and a very rich viola line. Schoenberg used lots of tremolo to thicken his mix, with notes often shaped “in reverse,” soft entrances giving way to muscled interiors.

In one passage, Presler ground out earthy notes at the bottom of her register, answered by Phyllis Kamrin with small viola sighs. The two mirrored phrases, and then the sound built as the others filled in and turned lament into song. Later, cellist Leighton Fong carried a single note into a new movement, one with an almost religious sense of deep waters, stable convictions and inner light.

The whole was dreamy and vividly of the night. 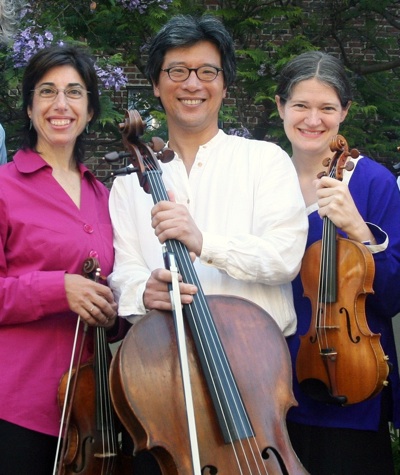 Their concert began with George Gershwin’s Lullaby for String Quartet, a little known gem with gentle arcs of melody and repeating phrases. Violinists Presler and Hrabba Atladottir explored lilting blues phrases as Fong’s bow skated on edge, creating an internal yet echoing space that seemed outside of time.

Guitarist Michael Goldberg followed with a solo even more internal, Benjamin Britten’s Nocturnal, based on John Dowland’s 1597 song of sleep and final rest. Britten’s variations began with short evocative phrases, slowly building complexity and then retiring. Goldberg was equal to the range and inner certainty, first drifting and then reckless, a dilatory ship. One section was dense and abbreviated, another buzzed with metal-sharp flamenco strokes, and a third dribbled down with doubled notes, strangely baroque, before arriving at Dowland’s lovely melody.

Fong followed with a cello solo, Suddenly It’s Evening, by Donald Erb. Thick chords and microtonal slides bespoke an artistic statement wrenched more from the performer than from his cello. When he began to hum as he played (all according to score), we felt Erb’s insistence on creative focus. Named after a short poem by Salvatore Quasimodo, Fong’s truth gestured towards the seeping twilight of our own souls.

This concert succeeded so well on so many levels that the small and faithful audience felt spoiled.