A night at the Met: murder, madness and popcorn.

The promise of technology is fickle, intersecting our lives in ways that can be devastating or impersonal. But occasionally that promise comes through, and our world makes small changes for the better.

Two years ago the Metropolitan Opera started an experiment in simulcasts, and it has taken off like wildfire. Now thousands of movie theaters around the world are poised to simultaneously project the live New York stage, bringing us an experience that previously meant airline tickets and pricey hotels.

On Saturday morning, March 19, patrons will be lined up before 10 a.m. at select Bay Area movie theaters to see live world-class opera. And indeed it is in a class of its own.

I was in New York last Friday, March 4, and managed to catch this opera before its “World debut.” Powerful realization of character, intelligent directing, grand sets and subtle lighting set the scene for magic. Natalie Dessay and a superb orchestra completed that formula in Gaetano Donizetti’s Lucia di Lammermoor. 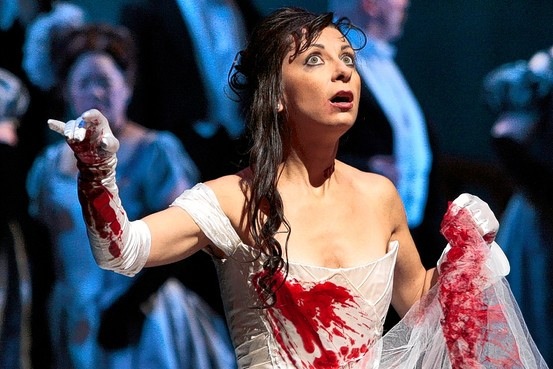 An Italian’s take on the wild Scotland of Sir Walter Scott gave us a love triangle that turns to hate. Brotherly love turns to coercion, lover’s vows turn to renouncement, and rivals glow with vengeance that trembles on the lip of desire.

Ludovic Tézier played Lord Enrico, the villain of this piece, supplying menace to his gravelly bass line. Everyone conspires in this tragedy, some with a blind eye as others speak of honor. But Enrico found that vengeance runs hotter than the bonds of blood, and coerces his sister into a sham marriage for money and spite. And so began a night of rape and murder and madness. Ah, opera!

The priest Raimondo, sung convincingly by Kwangchul Youn, held the moral center with his rich bass, a ground almonds and bitter chocolate tone that we wanted to believe in, even as he encouraged Lucia to her ruin.

Edgardo, sung by tenor Joseph Calleja, is the lover who misunderstands, a lover infected with the ghost of past passions. That transmission is literal in Donizetti’s version of the Scott novel, as Lucia sings to her helper of a girl who was murdered by her lover, and whose ghost she sometimes sees by the fountain. As she sings, a wraith approaches with slow steps and strokes Lucia’s cheek, passing on her sorrows.

But that Lucia! Dessay opened with delicate purity, a giddy and sensitive portrait of the poor girl. I have heard heftier voices sing that role, adding velvet brocade and Olympian runs. But Dessay was the more believable, a fragile beauty that breaks in the storm.

Directed by Mary Zimmerman and conducted by Patrick Summers, this version sustained its tension through three acts and nearly four hours. The Overture began with timpani, electric in the darkness, and then horns entered, sweet and impossibly smooth. From ethereal to crisp, Donizetti’s music set each mood, with crag and branches winter-bare. Dark hued blues leaked into the night sky, and clouds slowly scudded across the back of the set. Careful lighting washed the rocks with gold, and trumpets called out, the men of an early hunt.

Horns and hunters came and went, and snow trickled down as dawn feathered into day. Lucia entered and sang of love as the clouds’ thick grays were underlined with umbers and ambers. The sets, by Daniel Ostling, began and ended with nature, perhaps underscoring the inevitability of human nature. In the last act a glowing backdrop resolved as a vast moon, evoking lunar power—tides and madness.

Every scene was taut, but the climax—the mad scene, of course—held

the audience spellbound. Here Dessay evolved from sweeter arpeggios of love into a very believable madness. Descending a curved stairs in her bloodied white gown, she sang with gripping intensity and absolute clarity. And when she wadded up her torn veil and began rocking it in her arms there were few dry eyes.

The other standouts were the famous sextet, which showed off this cast’s unusually tight blend, and Edgardo’s death aria. Here Calleja’s voice, which is smooth and supple, spilled over the mourners’ chorus with a rougher edge and real emotion. As he sang, Dessay reappeared as spirit to stroke his face and help him guide the knife. Oops! Spo

And did I mention the flute and harp solos? Denis Bouriakov and Deborah Hoffman were both stunning.

Rather than keep this production to the lucky few, the live transmission hits movie theaters around the world on March 19 at 10 a.m. on the West Coast, with an encore on April 6 at 6:30 p.m. In the East Bay, the AMC Bay St. Theater in Emeryville will be showing this, along with the Pleasant Hill Downtown 16, the Walnut Creek 14, and theaters in San Francisco, Marin and Palo Alto. Information on the HD Live series is available at www.metopera.org/hdlive. Advance tickets are recommended.

Photo of Natalie Dessay as Lucia courtesy of Ken Howard/Metropolitan Opera. This article previously appeared in the Piedmont Post and Berkeley Times.