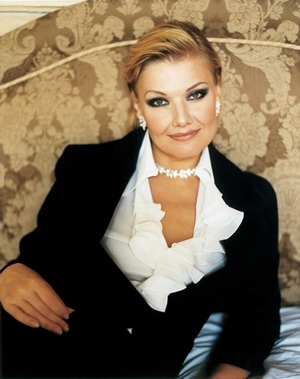 Karita Mattila sang the title role in a lurid thriller that first opened in 1926 Bohemia, now the Czech Republic. Leoš Janáček’s The Makropulos Case is a bumpy opera that can flag without a diva whose acting is equal to her voice. But such was not the case Saturday night with Mattila as the luscious-voiced and mesmerizing Emilia Marty.

Written between World Wars, when the German Weimar Republic was embracing the industrial age and Italians saw the rise of Futurism and fascism, Makropulos was based on a Karel Čapek novel that explores the ethics and politics of immortality.

The turbulent music reflected those unsettled times. The overture opened with rising brass intervals, fourths that anchored a fabric of mid-century machine sounds, and those intervals recurred throughout. Though trombones softened to French horn calls, a nervous energy pervaded the music, a sense that life had become mechanical and metallic. Unlike the late romantic operas that preceded this, where music accompanied and supported the vocal line, Janáček’s instrumental score winds around, and sometimes competes with, the vocal lines But this effect actually amplifies the mood.

The elderly Janáček may have adapted this story out of his own drama. Quickened out of his obsessive infatuation with Kamila Stösslová, a married woman 40 years his junior to whom he wrote 730 letters over ten years, Makropulos appeared late in the composer’s career. And whether those themes best describe his own sense of mortality—he died two years later—or his ageless muse, both seem to fuel the opera.

Mattila, playing a noir anti-heroine, arrives in a law office to search for the formula that has kept her alive for the last 337 years, draping herself over the furniture with a languor resulting from long hours in yoga studios.

Hers is a tough role. She adopts a glittering coldness that bespells the other characters along with the audience. The elements gel slowly, from the long back-story to the fragmentary music. The motives do not resolve as much as they impel, and there is an unsympathetic tinge to the vocal writing, almost an awkward or garish quality like the German Expressionist painters of the time. The soprano has high non-lyrical passages, often reminding one more of speech than of song, while the tenor sometimes strains for low notes. But these elements may actually help set the tone for the world-weary Emilia Marty character.

Bringing that noir quality into focus were nicely conceived sets, with a direct simplicity that heightened their effectiveness. Designed by Frank Philipp Schlössmann, the rotating set was entirely in black and white, an enlarged pen and ink drawing. Twenty-foot high curved walls were painted with crosshatched lines that shaded into darkness. Their bleakness set a tone of futility, and the out-of-proportion height diminished the characters.

Except, that is, for Mattila, who always appeared in white in the core of the action. The lesser characters wore tones of gray, and clumped together or stood in shocked tableaux.

A large illuminated clock dominated each set, ticking away in actual time. In the first scene that weight of time was made real as law apprentice Vítek, played by Thomas Glenn, pushed mounds of dust around haphazardly as he picked through books and papers.

While the set led us disturbingly into shadow, low spotlights created long shadows of the lesser characters that were larger than life. And, it seemed, longer than life. Each mortal suitor seemed to toil with the weight of what followed them, their death.

In the final scene the writing turned lyric and antiphonal, offsetting the shock of inevitability.

Opposite Mattila sang tenor Miro Dvorsky, bringing a sturdy believability to the lovelorn Albert Gregor. But a real treat was German bass-baritone Gerd Grochowski as Count Prus, with endearing warmth that fit well against her ice. Filling out the excellent cast were several Adler fellows, and they carried the intensity with youthful acting, a pleasant departure from the old “stand and deliver” school of opera. But they could certainly sing as well.

The following night I heard three of those Adler fellows in an evening of opera at Kohl Mansion, where Brian Jagde, Maya Lahyani and Austin Kness wowed the packed crowd with favorite arias of the past season. Since I mention this, I must add that Leah Crocetto, a soprano who will no doubt shortly follow Mattila as a lead on World stages, joined them there. 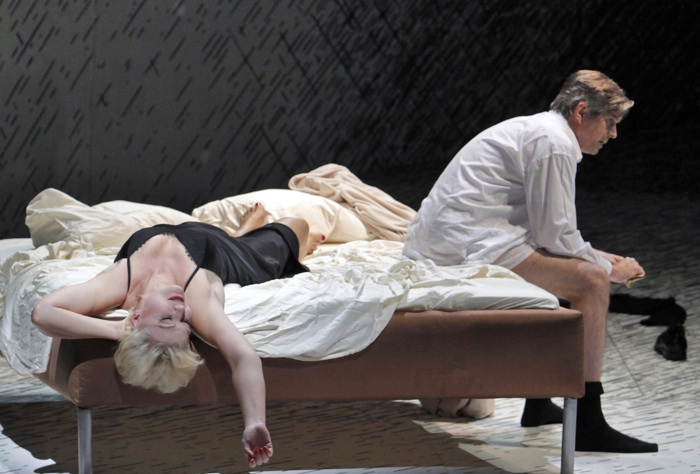