A spirited concert in Burlingame’s Kohl Mansion made this a record year for the Music at Kohl program, now celebrating its thirtieth season. According to Executive Director Patricia Kristof Moy, the concerts are nearly all sold out, a combination of intimate hall, top performers and a widening reputation.

On March 17 we heard a polished piano and clarinet duo, the remarkably fluid Jon Nakamatsu, winner of the 1997 Van Cliburn piano competition, paired with the technical wizardry of clarinetist Jon Manasse. The “Two Jons,” as they refer to themselves, commenced a satisfying program of master works and modern contenders.

Among those contenders, John Novocek’s Four Rags for Two Jons, written for the Manasse – Nakamatsu Duo, was a malted of mad dash and plain old-fashioned fun. For something that accessible and jaunty, it was also hugely demanding and surprisingly sophisticated.

But they saved that for desert. The meat and potatoes were a century or two older.

In Brahms’ Sonata in E-flat Major for Clarinet and Piano, their camaraderie was palpable, as they dashed their way up scales and then floated over the crests. Manasse was expressive, coloring his runs with an assortment of moods, while Nakamatsu was the epitome of a craftsman, hands floating up and drifting down. His strokes evoked a sense of calm reason, a restraint that framed the Romanticist passions of Brahms’ day.

And then came the Appassionato (with passion). But still these performers gave a cool reading of finesse over fire.

In the Grand Duo Concertant in E-flat Major, Carl Maria von Weber’s approach was less harmonically subtle than Brahms’, but he seemed more in tune with both the capabilities and sounds of each instrument. As the title implied, this was a collaboration of two soloists, but they didn’t just take turns in the limelight. There were lovely timbres of punchy clarinet calls over grumbling piano trills, and romps of melodic leapfrog and catch-me-if-you-can.

Our artists shone here, with Manasse drawing out the most amazing clarinet pianissimos and Nakamatsu feathering the air, his hands stroking the keys towards himself. And then thunder, and Manasse folding into an Italian love song. 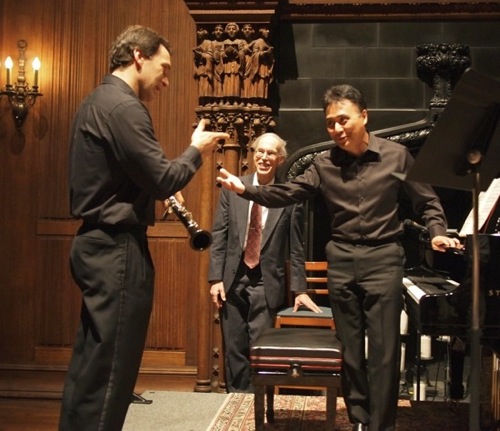 Manasse took the microphone and chatted with the very full house. “We drove down from the Rogue Valley last night. The Concertant was composed for a gifted clarinetist, Heinrich Baermann, and for Weber himself. They were so successful that they took it on tour, traveling together in a large coach… much nicer than the Hertz rental we were in!”

He went on to describe his first meeting with Nakamatsu. “He came into the room and saw me fiddling with a reed, and said, ‘Ach, you clarinet players and your reeds.’ So I answered, ‘You come in and sit down at the piano and you are ready to play.’ And then I gave a long description of the variables of the clarinet, and of the lips and lungs and temperature. He answered, ‘It hardly seems worth it!’ and we became friends.”

After intermission they took a turn to the personal.

Lowell Liebermann wrote Berceuse (in memory of Gustave Manasse) for Jon Manasse’s father, who died in Dec. of 2011, and it was a duet of tension and mystery. Nakamatsu introduced two arpeggios with an oddly open structure, almost neoclassical, and then Manasse entered with glowing notes like the entrance to Satie’s Trois Gymnopedie. Descending motifs of perplexity, distraction, and even-tempered sorrowing rotated around to the opening, and then finished on a long-held note that carefully evaporated.

In a contrasting vein, they jumped to Francis Poulenc, a member of Les Six, and sometimes thought of as the French Bad Boy of composing for his brilliant and disturbing pastiches. Although his Sonata for Clarinet and Piano (1962) was one of the last pieces he wrote, it still contains an undertone of sarcasm, with polyglot quotations that run the gamut from French dance hall to Russian ballet. Our Jons were playful in the Tristement, sorrowful in the Romanza, and back to sarcastic in the fiery con fuoco.

Music at Kohl isn’t just about a divine acoustic experience for the few. Last week Patricia Kristof Moy brought New York’s energetic Classical Jam group for a free concert at the San Mateo Public Library, as well as a week of whirlwind school tours. And then on Monday, March 18, Nakamatsu and Manasse performed another hour of rags for the very appreciative students of Mercy High School (housed in Kohl Mansion).

Photo of Jon Manasse and Jon Nakamatsu by Marie-Jose Durquet.

The next concert in the series is the impressive Amelia Piano Trio, Sunday April 14 at 7:00 p.m. Information and tickets available at www.musicatkohl.org.