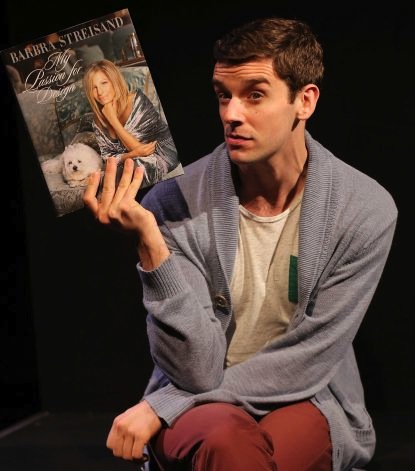 Tour de force is one of those phrases bandied about by reviewers so frequently that it’s begun to lose its meaning, but tour de force is le mot juste (la phrase juste?) for Michael Urie’s performance of Buyer & Cellar, which opened August 19 at the Curran Theater in San Francisco. Nothing better describes his 100-minute, no-interval performance.

Urie’s performance is not only precise and various – requiring that he assume the characters of a raft of personalities from an unemployed actor, to the actor’s queeny boyfriend, to a louche agent, to Streisand’s husband James Brolin, to Babs herself, to name just a few – but it blends the actor’s great charm with his high energy and clear, unadulterated joy. Is there any wonder that Urie won the Drama Desk Award, Clarence Derwent Award, the Lucille Lortel Award for Outstanding Solo Show, and nominations for the Drama League and Outer Critics Circle Awards for his creation and performance of the character Alex More, actor recently fired from Disneyland for giving lip to an insolent kid? Nope. No wonder at all.

The play begins with a short and intimate conversation with the audience about the reality of the story about to be enacted. Urie, seated cross-legged at the front of the stage, tells us it’s all fantasy, something dreamed up by the writer from reading a book by Streisand, My Passion with Design. He waves the book in front of the audience’s collective face and begins reading passages here and there, landing at the preposterous description of Barbra’s basement.

The (galactically vast, we guess) basement of her home in Malibu is where she stockpiles the heaps of things she has bought over the years and, in a moment of kitsch inspiration, the place where she built a museum of her own, a sort of shopping mall of one celebrity’s conspicuous consumption. Based, she confesses, on the Winterthur Museum in Delaware, a collection of nearly 90,000 objects gathered by Henry du Pont and “featuring decorative and fine arts made or used in America from 1630 to 1860.”

It is in this chat with the audience that Urie introduces us to the other brilliant performer of the piece, writer Jonathan Tolins. From the get-go Tolins has us caught in the other reality of theater: the reality of fantasy. And he constantly works a verbal sleight-of-hand with our imaginations. Urie, as Alex, insists that Streisand, as presented, is only Tolins’ imaginary creation, a necessary disclaimer when writing about “someone as famous, talented and litigious as Barbra Streisand.” But Urie is totally convincing as Alex, not only is he exuberant flesh and blood standing before us, but he is also talking to us, sharing with us the story behind the play, the real-life story.

Tolins takes advantage of the power of the fabulous, of the separation between the lives of the mythically wealthy and the average person reading the National Enquirer in the supermarket checkout line. We know just enough of these lives to be willing to believe everything he has drawn in his smart and insightful comedy. We also recognize the outrageousness of the events. Everywhere the lines between reality and fantasy are blurred.

Just a few minutes after the introduction Alex languishes in Babs’ basement, where thousands of things have been put on the shelves of little shoppes, it’s a quaint mall, a mall with no windows. Suddenly, after days of Alex waiting while wearing a little leather apron, the one customer arrives. Alex shows her a doll, and begins to riff on her backstory: Fifi, the doll, is the creation of a dead French Resistance fighter. Her past as she wended her way toward a doll shoppe in a basement in Malibu is poignant, devastating. She is irresistible. Alex and the anonymous shopper, recognizable by the fall of her hair, haggle over the price of the doll.

The plot has begun in this terrific piece of theater. Who will win in this battle of imagination? Alex? Barbra? Or you, the audience?

Buyer & Cellar continues through August 31 at the Curran Theater, 445 Geary St. (between Taylor and Mason), San Francisco. For information and tickets, call 888-746-1799, or visit www.shnsf.com.