Last Friday Music@Menlo opened their 15th season on the Peninsula with a lecture by Michael Parloff that linked the cities of London, Paris and St. Petersburg. That was an introduction to this year’s theme, “Creative Capitals,” a glimpse into how place fosters musical lineage and of how composers inspire and influence each other.

Following that was Saturday’s first concert, a look at composers in London, and that was the first of an astounding seven programs. The four lectures, seven concerts, and four recitals of this busy three-week festival are just part of the allure, which also fosters a Chamber Music Institute and has Master Classes, “Cafe Conversations,” and free Prelude Performances by outstanding younger musicians.

And then on Sunday, July 15, was their inaugural “Carte Blanche” recital series, where I heard the brilliant young violinist Paul Huang accompanied by pianist and Festival Co-Founder Wu Han. The program he planned touched on place to describe era. He mentioned this after a lilting Beethoven and turbulent Brahms.

“When I first heard about the theme for this year,” he said to the audience at intermission, “I for sure wanted to highlight Vienna, where our two composers are very ‘heart.’ But I promise the second half is lighter. And since France just won the soccer game, we end with Saint-Saëns!”

Huang’s selections through the evening highlighted the transformation from Classical into Romantic, and then turned to Hungarian composer Bartók for a nod to the folk music of the common people. And finally, of how Saint-Saëns further widened that scope to create a bridge from the Romantic era to the exotic harmonies of the French school as distinct from its German forebears, with colorful orchestrations and touches of North African scales.

Beethoven wrote his Violin Sonata in G Major, op. 30 no. 3 in 1801-02 in a hamlet on the outskirts of Vienna. His doctor ordered him to leave the noisy city of Vienna in the hopes of stopping his hearing loss and to help recover from stomach troubles, although that was not to be. But this violin sonata is surprisingly sunny for the personal turbulence, which also included a broken heart. It shows a maturity of the Classical tradition, intricate and lively, along with the stirrings of Romanticism in its quick mood changes.

Pianist Wu Han was an encouraging partner, warm and supportive in the melancholy moments and furiously on point in the big runs. Her pedaling was judicious, never over-running the softer violin—and she pedaled in her trademark high heels, audaciously high and colored a bright carmine red to match her smile. For a moment I wished I was a fashion writer, but what interested me more was that while her right foot pedaled, her left bright red shoe clicked the pages on her e-tablet, so that her hands never had to turn pages.

The first movement had the sharp turnabouts of an old wooden roller coaster, but in the slower “minuetto” the violin went low and heartfelt. This was not quite the storming forces of the German Romantics, but Beethoven was pointing the way with poise and that heroic quality that he later explored, and coupled to a melody of such earnest simplicity that it was childlike.

And after, piano and violin crackled along for a splendid finale, with Han cueing Huang with leans and head tosses, not just in the rhythms, but it seemed that she was reminding the younger musician that they were supposed to be having a blast.

The Brahms, on the other hand, was serious stuff, with deeply bowed violin chords on themes fraught and hallowed. This was the height of German Romanticism, a movement that was as much religious as philosophical, and looking towards Nature as an aspect of the Divine. After four centuries of conflict between Lutherans and Catholics, the composers and artists of this new movement were moving away from the balanced colloquy of Classical music and listening and giving voice instead to deeper passions, the Truth and Beauty of our messy human hearts.

In the slow Adagio Huang played with his eyes closed, and after, I saw him wiping his eyes. Yes, this was the real Brahms, the composer who would run weeping through the fields in the early morning. The violin notes were slow and fat here, and then dissipated into the air and we held our breath under the weight of their vulnerability. They swept into the Presto with piano runs that rumbled and then exploded into storms, and the violin matched each mercurial feeling.

And after that grueling work, they turned to folk-inspired expressions from Eastern Europe. Bartók’s Hungarian Folk Tunes, originally written in 1909 for children, was unexpected and impish, with five short movements that wandered from gentle melancholy to teasing Gypsy scales.

They finished the evening with Saint-Saëns’ Violin Sonata no. 1 in D minor, a work of careful forms and splashy colors. Wu Han delivered brilliant waterfalls of notes, while Huang added fierce runs and an impossibly breathless finish.

“Do it again!” shouted an audience member during the long standing applause. They laughed, still breathing hard, but then delivered Arthur Benjamin’s Jamaican Rumba as encore. That romp, full of “wrong” notes and Island sauce, said it all.

This was just one evening of a thrilling festival, and I urge all to come hear these World-class artists up close. See musicatmenlo.org for tickets and info and audio notes and more.

—Adam Broner
Photo below of Paul Huang and Wu Han after the concert; photo by Geoff Sheil. 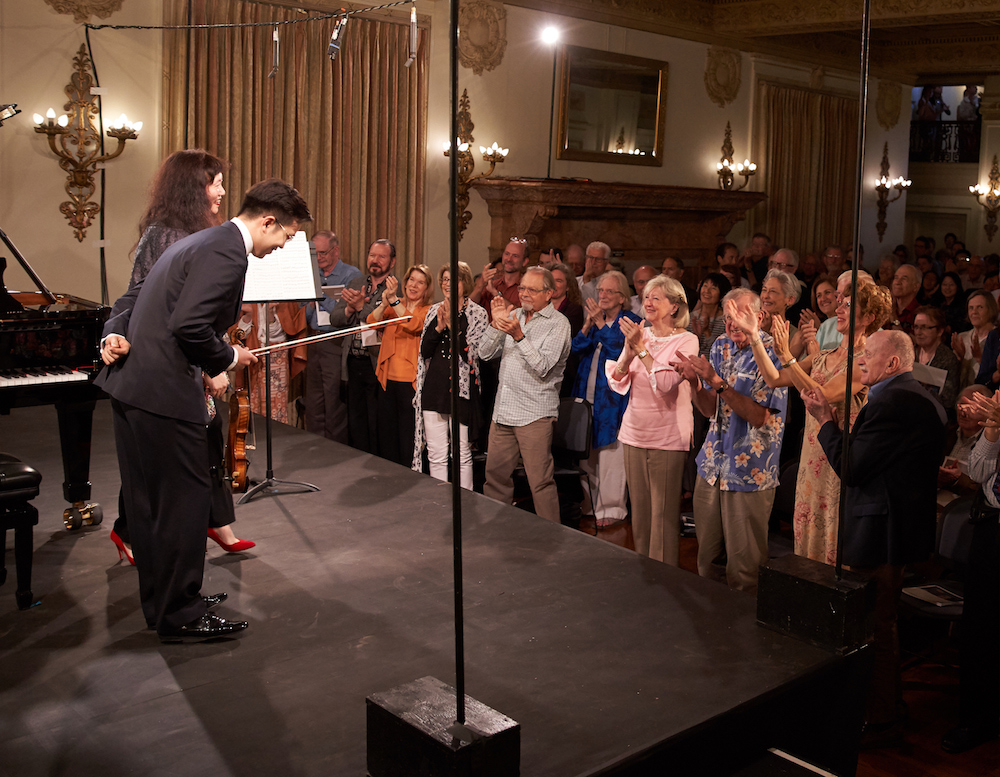