But that was after the intermission.

On their first half they embarked on a long and arduous mission, Dmitry Sitkovetsky’s chamber orchestra version of Bach’s Goldberg Variations. Bach’s challenging and much loved piano piece, consisting of a gorgeous aria and 30 variations, is often attempted, though Glenn Gould’s recording is definitive. Gould, a child prodigy and eccentric genius, gave Bach a clarity and lightness that few can equal.

Sitkovetsky’s chamber orchestra version transcribes Bach’s multiple voices, or polyphony, into separate strings, but it remains a chancy undertaking—not because of the technical difficulty, which the NCCO did in tip-top shape, but because of the intensity of feeling, camaraderie and mind reading required.

Nadja Salerno-Sonnenberg, a legendary soloist who has catapulted the NCCO into prominence in the last two years as the new artistic director, offered an opening curious for this powerful violinist. Rather than Gould’s quiet ecstasy, she favored an approach to the aria that was hesitant. And in later movements she replaced Bach’s warmth with a cooler technical perfection.

This brought the variations closer to exercises than to Bach’s arc of intention and statement of faith. But nonetheless there were many grand moments, including some gorgeous interchanges between Salerno-Sonnenberg and cellist Susan Babini, violist Anna Kruger and second violinist Candace Guirao. In particular, Babini’s richness in the more legato moments, Guirao’s animation and empathy, and Kruger’s care made for some inspiring music.

I heard Sitkovetsky perform his own version two years ago in Calistoga. There, he stood on a broken ankle and carefully braced his violin with a shoulder which he had dislocated the previous day, along with torn collar bone ligaments, the result of falling out of a motorized golf cart which then ran over him.

Nonetheless, his playing glowed with love, perhaps a result of his brush with mortality, or his refusal to take anything for the pain, so as not to interfere with his performance. 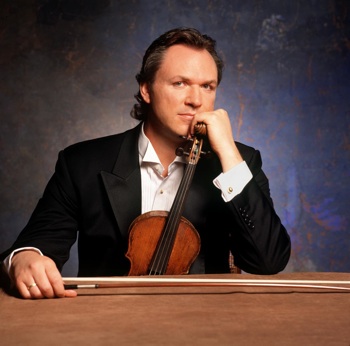 Music is clearly not for the faint of heart.

And then the dazzle.

After intermission we heard three pieces by this year’s featured artist/composer Mark O’Connor, whose lovely use of variation makes his work a natural pairing for the Bach. Song of the Liberty Bell used a simple and satisfying theme and gloried in slow variations and rich orchestration.

His 1986 Strings and Threads followed, a set of 13 jewel-like works that followed the development of 300 years of American violin playing. It was also an opportunity to show off O’Connor’s awesome technique, from plaintive Irish reel and jig to the rounder twang of Appalachia. Then he slid down home with blues, scrubbed his way through Texan fiddling, and wowed us with a ferociously gleeful “Sweet Suzanne.”

They rounded out the set with Appalachia Waltz, a work made famous by his collaboration with cellist Yo Yo Ma and bassist Edgar Meyer. Full of sweet melodies and exceptionally clean double stops, the work brought an instant sense of nostalgia.

After standing ovations, O’Connor dished up three encores. The first had a Spanish and Argentinean flavor, spiced with Sarasate slides and Piazzolla whips. After the crowd continued to stand and applaud, O’Connor returned for a duet with Salerno-Sonnenberg that turned almost duel, as they challenged each other to devilish finger work and insane bowing. That moment was well worth the price of admission!

But then O’Connor upped the ante with a solo of staggering speed, and a testament to the violin school he founded, one steeped in American fiddle traditions.

O’Connor will return in May for the premiere of Elevations, which he is writing for the NCCO.

The New Century will go on tour this winter, but before they leave, on Saturday, January 29 at 8 p.m. they will perform their tour material, including Piazzolla’s Four Seasons of Buenos Aires. Salerno-Sonnenberg soloed in that piece in a stunning 2008 performance. Tickets and details are available at www.ncco.org.

Previously published in the Piedmont Post. Photo of Mark O’Connor by Jim McGuire.