Success at the Paramount

The Oakland East Bay Symphony filled Oakland’s Paramount Theatre with a big sound that suited its Art Deco excess, in a program that happily combined neo-Wagnerian film score, Tchaikovsky’s grand Symphony No. 4, and an orchestral/electronic fusion that exploded from the stage.

John Kendall Bailey guest conducted Vertigo with great vigor, raising the bar with long motivic lines and splashes of Spanish slink. Bailey, the director and conductor of Trinity Lyric Opera, is an enthusiast of Bernard Hermann, whose centenary is celebrated this year.

After the “rooftop chase” of the first movement came the love scene’s simpler violins, harmonies that drifted and slowly swelled into a grand “Tristan und Isolde” moment, themes striving to resolve and shying away, dying on shimmering horns.

Michael Morgan, after a droll greeting and gracious introduction of Bailey, retook the stage for Fade to Orange, a fascinating fusion of alternative rock band and orchestra by composer/drummer Scott Amendola.

Atmospheric and moody, it built on Hermann’s film genre with simple motifs and lush color. This World premiere was also an orchestral first for the bandleader, a work that few artists would have a chance to realize without Morgan’s two-year cross-genre experiment, and arguably the most successful. Elinor Armer, a professor of composition at the SF Conservatory of Music, helped mentor Amendola in the intricacies of orchestra-writing, though he is a long-time jazz and rock composer and pillar of the Bay Area music scene.

Amendola entered with a stick solo, augmented by electronic loops and then by strings, which tapped percussive murmurs on the wood of their instruments. That built to a steady rain, the random sound of high complexity. Trumpets took the melody, repeated phrases separated by strings or winds and then embroidered by guitarist Nels Cline, a frequent collaborator with Amendola and the lead guitar of alternative rock band Wilco. Cline’s passages veered from short flurries to single belling notes, amplified into golden shape over cello and violin fields.

The third addition to the orchestra was electric bass player Trevor Dunn, who laid down a melodic strand so deep and rich that it created landscape—nimble, but in an unexpectedly low register.

Amendola explored the gap between composition and improvisation, with the orchestra exactingly scored and the jazz/rock musicians adding ad lib elements.

The only off-note was the attention Amendola gave to balancing the electronics rather than playing. An engineer would have freed him to pursue his playing, which had some awesome runs. 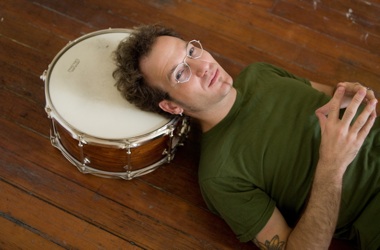 After intermission Morgan led a majestic rendition of Tchaikovsky’s Symphony No. 4, arguably one of his most popular. Written at a time when he was undergoing deep personal crisis, this has a regal and arresting opening—A-flat horn blasts that he described as “fate”—and lovely use of pure Russian melody.

The trombone blasts and intense silences were electric. And when those blasts faded down to soft French horns the sense of depth was huge. Morgan was excellent in this, thundering to his cellos and then calming the waters for bassoon.

The oboe entrance of the second movement had a gift for ambiguity—sweet and simple, yet sophisticated and melancholic. It was a very Russian outlook, and one that the cellos repeated, chesty and heartfelt. Hope may have followed, but the orchestra was a little bogged down, a little too mechanical, to properly convey it.

But they made up for this by nailing the finale with big runs, clean unisons and elegant oboe solos. Ah! Great works done well. There’s nothing like the thrill of a live setting—to hear every horn triumph or bobble, or to experience the enormous range of dynamics, from the intimacy of a lone clarinet to the hair-raising might of the orchestra’s full blasts.

The OEBS returns May 13 for a season finale that promises pure gold: a concert version of Kurt Weill’s Street Scene. This is the fourth in their American Masterworks series with 12 excellent vocalists and the Oakland Symphony Chorus.