After a fabulous blue-themed gala opening and quick trip to Europe the San Francisco Symphony has settled down to some serious music making, some of it with guest conductors. On Saturday, October 30, a young Spanish conductor was paired with a very young—and accomplished—soloist in a program with memorable moments.

The 33-year-old Pablo Heras-Casado conducted and 22-year-old Alice Sara Ott gave a sharply chiseled rendition of Franz Liszt’s Piano Concerto No. 1, and the audience rendered her due in standing ovations until she came back for an encore. 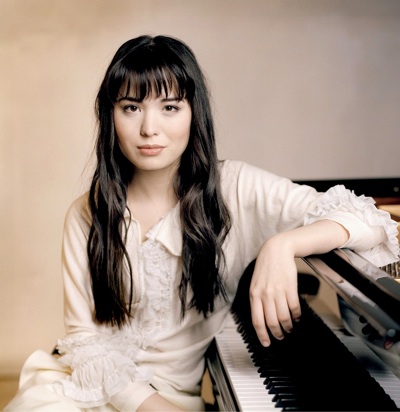 The lovely Ott has been making waves in the classical world, and this was her premiere appearance in San Francisco. Using a high action and nimble clarity, she carried out nuance as well as power. Those nuances would be surprising to hear against an armada of strings, but Liszt’s careful orchestration made sure never to eclipse the piano—himself—in his searingly romantic concerto. Liszt, described as “the world’s first rock star,” began writing this when he was just 25, but tinkered with it for the next twenty years.

This was the second piano solo that I heard in a week, both by Liszt. And where Ott was bright and fiery in the concerto, Jeremy Denk’s rumbling runs gave the Dante Sonata its brooding character (see October 27 Piedmont Post). Liszt’s own virtuosity and wide-ranging composing certainly leaves room for both approaches, and he was known as a teacher who—when he was not sleeping with his students—encouraged their own musical voices.

Ott’s trickles and thoughtful pauses were matched by rounded phrases from the orchestra, which Heras-Casado kept tightly reined in. He gave her permission to be soft—and she was, a dynamic breadth that built from quiet musing to watery rhapsody. And then on to wildly virtuosic runs and punishing chords that lifted her off the piano bench with the force of her playing!

In the third movement a triangle silvered time into fragments, and Ott followed with playing that was just as short-stroked and scintillating, before returning to power runs and a blow-out finish.

After many bows she returned and sat down to play a lingering and lovely Für Elise as encore, and I finally noticed that she was barefoot. The long-legged Ott could do that and remain literally “in touch” with the pedals and piano, perhaps a clue to her perfectionism.

…and truth in Mendelssohn.

Before the Liszt, Heras-Casado warmed up with Felix Mendelssohn’s Fingal’s Cave Overture, a well-known crowd pleaser that he conducted without score. This was solid music solidly crafted. Conductor and players alike seemed to pull it from within, reminding me of theatrical work, where drama is impelled by character, not situation.

Mendelssohn delineates the Scottish shore with swells and kettledrums, and the SF Symphony followed Heras-Casado’s dynamic tempo changes fluidly. The simple motifs were grounded in bodily rhythms that then built to dramatic highs. With delicacy, power and depth, they achieved what actors strive for, the truth of a character.

After this blockbuster, the second half of the program seemed poorer in comparison. György Kurtág’s Grabstein für Stephan was better suited to the sound studio than concert hall. The small groups of instruments and unsupported guitar were less stew than gruel. It is difficult for a single guitarist to carry the subtle color and silence, reminiscent of the Zen-like compositions of Toru Takemitsu.

And then came Shostakovich’s heroic tribute to Lenin, a patriotic work regarded somewhat cautiously in view of his long persecution by Stalin. As big-boned as a Slavic peasant, Symphony No. 12 was commissioned by the Communist Party as a salute to the Bolshevik uprising and to Lenin. Though seldom performed in the West, this work has electric tensions, locomotive undertones, cruel piccolos, and Russian folk themes…and the finale is a trombone showstopper!

This week the Symphony joins forces with pop star Rufus Wainwright in an unusual program that also includes works by Milhaud and Weill. See www.sfsymphony.org for details and tickets.

This article previously published by the Piedmont Post. Photo of Alice Sara Ott by Felix Broede/DG.