In a rare appearance world-renowned tenor Placido Domingo took the stage at the SF Opera House in the title role of Cyrano de Bergerac.

It was a mesmerizing performance.

Set to Edmond Rostand’s immortal text, composer Franco Alfano premiered the opera in 1936, and though it was successful it disappeared from the repertoire for many years. Domingo encouraged its return, and the Metropolitan Opera staged it in 2006.  Patrika Ionesco designed and directed Cyrano in Paris last year. Domingo starred in it then, and the SF Opera was fortunate to arrange for both the sets and the star.

Ionesco’s lavish sets were shipped from Paris in eight 40-foot-tall shipping containers, and he brings the seventeenth century to life in all of its grandeur, bustle, excess and virility.

Fencing choreographer Francois Rostain and fight director Jonathon Rider choreographed a hair-raising display of blade and beauty, using swordsmen, acrobats and dancers to flesh out a festive theatre riot, electric street brawl and grim scenes of war. The clash of real blades and blindfold dueling kept these artists on edge.

And through it all pranced Placido Domingo, delighting in his larger-than-life hero—and nose—with a voice somewhat darkened by age, but still big enough to command the stage. 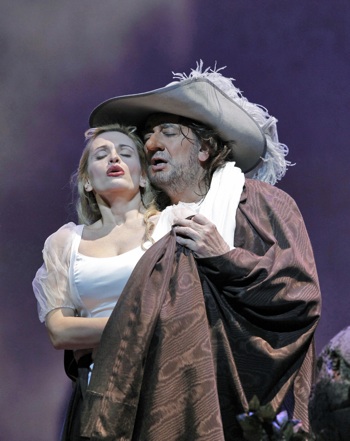 Alfano is best known for his opera, Risurrezione, and for his attempt to honor Puccini’s last wishes by completing Turandot. But even that careful orchestrator could not bring warmth to Puccini’s icy princess.

In Cyrano his diaphanous orchestration complements the high action without overpowering the stage. But the lack of easily identifiable motifs or arias left the singers battling for musical identity.

Alfano is an excellent craftsman, but there is a quality to the shortened and questioning phrases that makes the music seem incidental—but hugely atmospheric, and tinged with Wagner. The vocal writing, natural with the cadences of speech, is no more definable, and Roxane’s high tessitura is nearly as punishing as is Puccini’s ice princess. At times the cello would shine with a lyrical passage, and the leads would embroider with less finished phrases. But nonetheless their emotions were immediate and tangible throughout.

Patrick Fournillier, after conducting this production last year in Paris, led the excellent SF Opera orchestra with grace and wit.

Opposite Domingo sang Basque soprano Ainhoa Arteta as Roxane, and she brought believability and a coy chemistry to her role. Brazilian tenor Thiago Arancam was the supple third in this tangled love triangle.

Despite Ionesco’s penchant for too much action onstage to be viewed at once, there were some lovely directorial moments. On his way to a fight, Domingo pauses to admire the fog-shrouded streets of Paris. As the rear curtains part, the others freeze and Domingo steps out of scene to sing of the loveliness of the night. That freeze-frame, lit in blue, was enchanting. Though it is rare to both direct and design sets and lights, Ionesco, who does do this, conceived a clear unity in his treatment.

Another choice moment comes in the midst of war. Starving and low in moral, the troops are close to mutiny when Cyrano calls for a song from the flute of a shepherd. Flutist Stephanie McNab, dressed in a soldier’s garb, plays the haunting tune from the stage. As poetry is love to the inexperienced Roxane, so also is music their food, and so completes Rostand’s metaphoric power.

But one element is not made romantic—the horror of war. Ionesco’s grim treatment, with broken towers and clouds scudding against a night sky, is followed in the final scene with a bent wind-blown tree, ingrown and barren in the silver light, the wages of Cyrano’s loyal service.

And after all the gallantry and swashbuckling, the love and deceit, the opulence and confusion, Domingo stays true to the Gallic impulse and is touched by…panache!

Photo of Placido Domingo as Cyrano and Ainhoa Arteta as Roxane; photo by Cory Weaver.