When the scrim, which is like a sheer veil before the audience’s gaze, rises what is thrown into sharp relief is a severe world of bronze-colored walls at the center of which is a huge black disc. Behind that new moon disc is the cistern in which the prophet Jokanaan is held prisoner. The mouth of the cistern opens and closes like the lens of an eye. To the audience’s left another cistern-like opening leads off-stage: the light pouring through it is white and suggestive of the full moon.

The image is apt—a visual realization of Oscar Wilde’s sultry and mystical text that forms the libretto of Richard Strauss’ Salome. The opera is the fifth presentation of the San Francisco Opera’s season, and it occupies a musical and imaginary space unlike anything presented so far.

“How beautiful is the Princess Salome tonight,” sings the young Narraboth.

“The moon looks like a woman rising out of a grave,” replies the Page.

The words fasten on the color white, combining both innocence and a macabre sexuality. Later, Salome will describe the body of Jokanaan as white and ivory, and she will then reject his body as he rejects hers, turning instead toward its spectral opposite: “The silence that dwells in the forest; nothing is so black as thy hair.” Finally, she will settle on his mouth and the color red: a “pomegranate cut with a silver knife.” 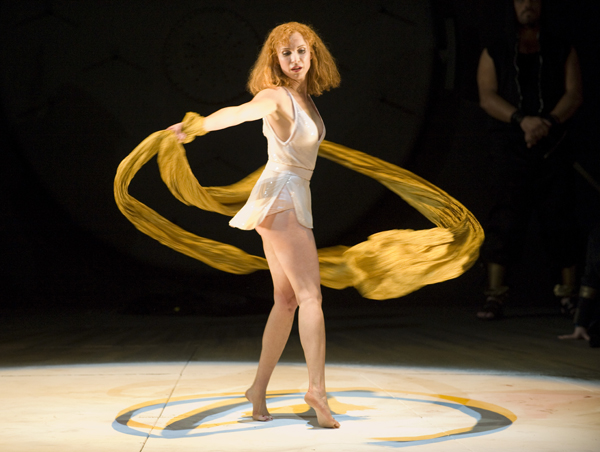 Just as the words are excessive so is Strauss’ music—full of lush layerings, symbolic motifs, polytonality and strange dissonances—though the music tends to be oceanic rather than spare and imagistic, and as such needs powerful singers to ride the difficult vocal line above the seething sound of the orchestra, conducted by Maestro Nicola Luisotti. Soprano Nadja Michael has the kind of huge voice that can soar above the massive Strauss sound, and it is a beautifully warm voice, one anchored in mezzo-soprano overtones. A splendid actress, Michael created a Salome that was childish, sulkingly lustful and totally scary crazy. Even more Michael can dance—no small feat given that some eight minutes of the opera are dedicated to the Dance of the Seven Veils, a long musical sequence of sinuous instrumentation. The choreography, by Director Sean Curran with Lawrence Pech as dance master, and the shifting of the various veils was pleasing in itself, unlike most operatic versions, which you just wish would be over almost as soon as they are begun.

Equally attractive was bass-baritone Greer Grimsley whose voice had the authority and resonance suitable to a prophet through whom God speaks. Grimsley, long-haired and statuesque, was able to project a similar obsessional insanity into his character, solidifying the two-sides-of-the-same-coin contrast that is core to the opera’s tension.

The rest of the cast, however, had serious problems projecting over the music, despite the skill and quality of their voices. Even so the opera was compelling in its darkness, driven on by the twin compulsions of Salome and Jokanaan.

Photo of Nadja Michael as Salome by Terrence McCarthy