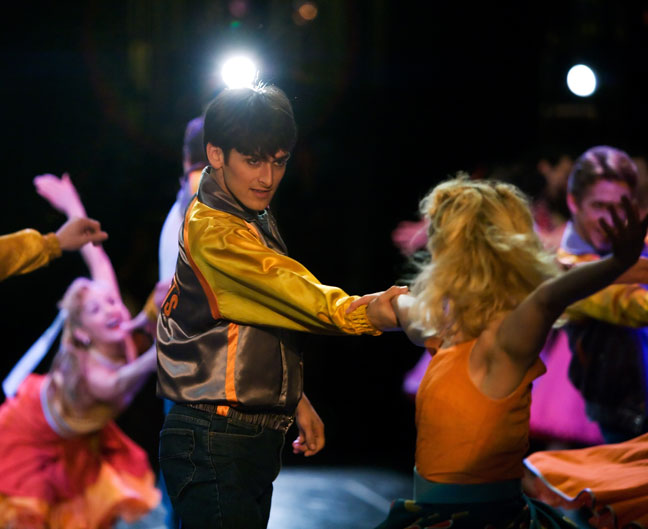 Thursday, March 6, San Francisco Ballet opened its fourth program of the 2008 season with three Jerome Robbins pieces that spanned the choreographer’s lifetime: his first choreographic masterpiece, Fancy Free (1944), the more classical In the Night (1970) and his 1995 West Side Story Suite. It was a fitting tribute to a great 20th-century American choreographer by a company that shared many of the same dance roots as Robbins’.

It’s hard for me to put my finger on why I think Robbins remains unsurpassed by any other American choreographer. It’s more than the range of his dance vocabulary. Or the fluidity and “rightness” of his sense of movement. Rather, it’s his deep ironic intelligence, which is constantly evaluating movement in the midst of movement, so that at any instant those movements can morph into something different, unexpected, startlingly new. And the change comes at such a subtle point that it would be barely noticeable, if it weren’t so original.

That’s why it’s hard to imitate or parody Robbins. You can only be inspired by him.

Robbins’ ability to subtly alter movement into the unexpected was most easily noticeable in the neoclassical In the Night. Set to Chopin nocturnes, the ballet shows three couples in romantic duets, each with a singular emotive tone: the innocent lovers (Yuan Yuan Tan and Ruben Martin), the decorous lovers (Elana Altman and Tiit Helimets), and the wildly passionate lovers (Lorena Feijoo and Damian Smith). Within the nexus of partnering, that Robbins genius came out: The lifts are remarkable—as unpredictable as the emotional relationships they are drawing—and breathtaking.

Robbins’ humor also asserts itself in the dance of the third couple. Satirically aware of the narcissism of romantic ballet (about which hisAfternoon of a Faun is the apex of wry yet wistful commentary), he borrows melodramatic gesture from silent films: the head thrown back, arm thrown upward, the back of the hand resting on the forehead. In the midst of their emotional silliness, however, the lovers are driven on by a drama punctuated by extreme lifts: they careen toward and away from each other. The observer is compelled into their theater of love.

In the Night requires the precision and technical excellence that characterize SF Ballet. These same qualities tend to dampen the spirits of Fancy Free, which is better served by a looser, gamboling energy. Fancy Free is a showcase not only of Robbins’ endearingly humorous side but also of his ability to translate everyday movement into a classic-minded formalism.

There’s a place for us

The highlight of the evening was the West Side Story Suite. A west coast premiere this season, this piece assembles the major dance pieces of the musical into its own coherent 30-minute work. One with a more upbeat tone, because it ends with the “Somewhere Ballet,” the dream sequence that envisions a world free of urban strife.

The choreography finds elegance in simplicity of gesture, simplicity for which balletic precision is a must, especially in the fight scenes. The male corps was stunning, vigorous and loose-limbed: I’ll take jeans over tights any day. The choice of lead roles was influenced by the need to have dancers who could sing, and it led to a happy mix of performers. Soloist Rory Hohenstein was a terrific Riff, urging his gang to “stay loose” in the “Cool” section—a choreographic gem in which the gang members express their pre-rumble anxieties through short bursts of emotionally uncontrolled movements. Corps member Shannon Roberts delivered a dynamic and sexually charged Anita while singing about the deficiencies of her homeland in “America.”

The addition of singers for the more difficult songs was well staged. Natasha Ramirez Leland sang the challenging “Somewhere” with beauty and poignancy.

A wonderful distillation of classic musical theater into an intensely moving and brilliant dance moment, this SF Ballet production is one for which we can all be thankful.