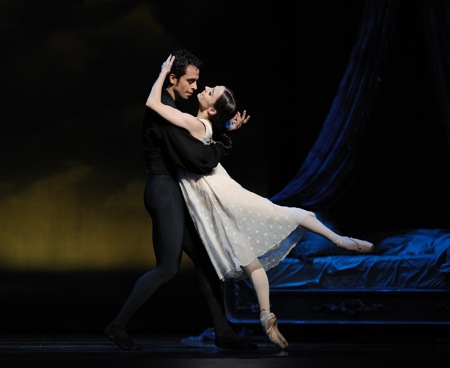 On Saturday afternoon, January 28, San Francisco Ballet presented the second performance of its beautiful production of John Cranko’s full-length ballet “Onegin.” Based on the poem by Alexander Pushkin, the ballet tells the complex tale of a young man who spurns the love of an innocent but socially awkward young woman, only to find years later that she has become his romantic ideal and the object of his love.

The 19th century used conventions of mime and simplicity of plot to solve narrative ballet’s principle challenge, which is how to tell a story when limited only to gesture, without using words. But contemporary ballet needs other solutions, especially when confronted by a story that is deeply psychologically as well as occurring over a long period of time.

A second and connected problem of Onegin is that it presents a world with a very different understanding of honor than ours. When Onegin recklessly flirts with his friend Lensky’s beloved he seems to do so in order disappoint Tatiana’s romantic hopes. The flirtation, however, leads Lensky to challenge Onegin to a duel, which ends with Lensky’s death and Onegin’s own death by self-confrontation.

Cranko solved these problems by offering a metaphor that is repeated in multiple and kaleidoscopic form: what is seen in mirrors stretches across a spectrum of emotions. Olga joyfully recognizes her lover Lensky in the mirror she uses to ready herself for her birthday party. Tatiana sees Onegin in the same mirror and is both frightened and captivated. And it is through the mirror in her bedroom that Tatiana’s dream version of Onegin enters to enact her projected passion for him. Later, Tatiana sees her husband, Prince Gremin, in her boudoir mirror and is startled, which leads her to realize her genuine affection and love for him.

Similarily, Cranko used ballet’s suggestible beauty of movement to demark the story’s complex love relationships by constantly changing its emotional overtones. Some of this variety is predictable: the pas de deux of the two young lovers, Lensky and Olga, is ebullient and persuasive.  The third act pas de deux of Tatiana and Prince Gremin is gently regal.

Where Cranko exceeds the historic conventions of narrative ballet is in the two pas de deux between Onegin and Tatiana, which are profoundly kinetic and technically difficult to the edge of dangerous. Tatiana is flung, rolled, dropped and caught. The closeness of the two dancers and the need for split second timing leaves viewers on the edge of their seat. This is an incisive portrayal of the Romantic era’s dangerous love.

Four different casts have been rehearsed for the company’s four performances. Saturday featured Davit Karapetyan, whose dark looks and clean balletic lines conjured an excellent portrayal of the haughty but passionate Onegin. Vanessa Zahorian danced Tatiana, infusing the role with a quietly elegant grace—an emotional tone she seems to have perfected. Taras Domitro and Dana Genshaft accomplished exquisite performances as the young lovers, Lensky and Olga, and the ensemble was terrific—especially eyebrow-raising in a line of grands jetés  performed in sync across the stage while holding hands, each leap perfectly matched.

And what would ballet do without the music of Tchaikovsky? The score was an arrangement of music from various works by the composer, excellently arranged and orchestrated by Kurt-Heinz Stolze. David LaMarche conducted the San Francisco Ballet Orchestra in wonderful performance of this darkly emotive score.

The set and costume design by Santo Loquasto and lighting by James Ingalls provided the dancers with a setting that was both abstract and readable—like the black velvet setting for a string of richly luminous pearls.