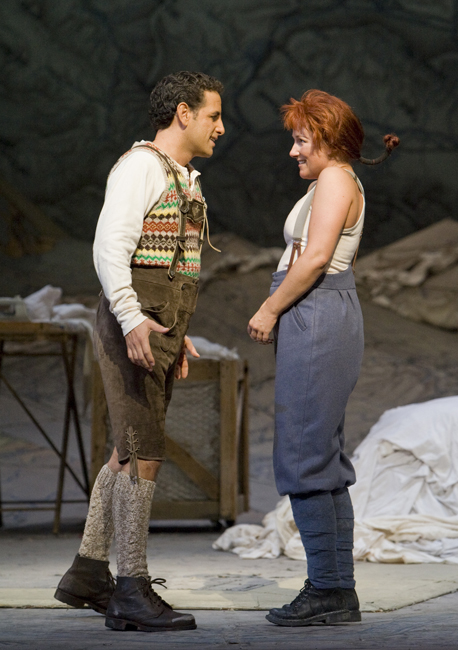 Laughing while marching to a different drum

When we think of opera we don’t usually think of physical comedy—convoluted plots, disguises, cases of mistaken identity, misappropriations of hearts and finances, perhaps, but seldom fall-down-on-your-backside physical comedy. But fall-down, legs-splayed comedy is what the San Francisco Opera is serving up in their current production of Donizetti’s La Fille du Régiment, a co-production of the Met, the Vienna State Opera, and the Royal Opera, Covent Garden, and it only increases the charm and vivacity of this comic story of first love conquering the silly forces of class and property.

Though everyone, from supernumeraries to stars, participates in the exaggerated gestures of a comedy packed with characters that could reform the commedia dell arte, it is the two young stars and protagonists that infuse the opera with undeniable passion and gusto. Coloratura soprano Diana Damrau shines theatrically as well as vocally in the role of Marie, the canteen girl of the 21st regiment of the French Army. Dressed in gray army trousers, a sleeveless T-shirt, and an insouciant red braid that flips up in back, her daughter of the regiment is a Pippi Longstocking of a girl—outspoken, clownish, brave and infinitely good-hearted. She attacks the ironing board with demoniacal vigor, stomps across the stage dragging a clothesline of long johns, peels potatoes with a ferocity bordering on frenzy, all while maintaining a stream of exquisite coloratura notes. Damrau’s upper register dances blithely through dynamic shifts and achieves stone-skipping-across-water speed; her middle and lower registers are more weighted, as befits Marie’s earthy sensibility in this production which puts the buffe back in opera comique.

Matching her musicality and spinning out his own superb high notes, for which he is justifiably known and applauded, is Juan Diego Flórez as her would-be lover, Tonio. The handsome tenor’s portrayal is subtler but equally precise; his Tonio is full of naïve passion, a peasant boy with native grace and valor. And his voice is the essence of verve: bright, quicksilver, and focused like a laser beam.

Supporting them are contralto Meredith Arwady as the Marquise of Berkenfield, the aristocrat with a past, who adopts Marie (who is her own abandoned daughter) in order to marry her into the more desirable upper classes, and who plays a mean piano while instructing Marie in the delicate young lady’s art of singing. Bass Bruno Pratico as Sergeant Sulpice is an affable comic figure as the regiment’s head father of the young Marie.

New conquerors of an old opera

French Director Laurent Pelly has brilliantly staged the whole affair, shunning technological innovation—theater’s choice du jour for dramatic impact—and making theatrical demands on the singers that suffuse the opera with an energy that comes from the players’ internal resources. Groups of characters cluster and flow, providing concentrations of human vitality that are both vigorous and transparent in their function: a group of women huddle at play’s opening, ooohing in fear at the onslaught of the French Army; the 21st regiment forms barricades of bodies; and, in contrast to the lively Marie and her beloved 21st regiment, the aristocracy that would claim our heroine appears as a milling clump of doddering fogeys.

Set Designer Chantal Thomas uses the metaphor of folded maps to create a topographical landscape that is both evocative and clear, adding several levels to the tilted stage and mirroring the offbeat dynamism of the production. Conductor Andriy Yurkevych leads everyone in the merry dance.