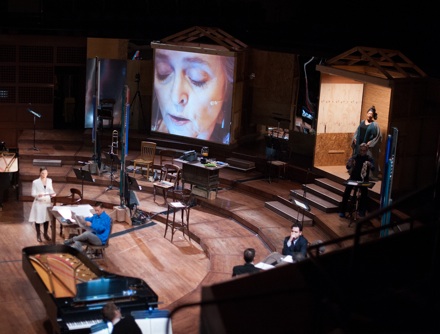 Marching to the beat of a different polyrhythm

Jiggling the sacred tenets of performed music is central to this month’s Maverick Festival at the San Francisco Symphony, a series of four different programs of American composers who truly changed the game. Conductor Michael Tilson Thomas first held this festival in 2001, and this week he reprises and appends that festival at Davies Symphony Hall before taking it on the road to Ann Arbor, Chicago and finally New York’s Carnegie Hall. On Saturday I was able to hear four works by composers who outraged their critics. The questions they raised are nearly as audacious today.

John Cage had once defined music as simply a succession of sounds, a loose definition that spreads the artistry (and work!) between the composer, performer and audience.  In his 1970 Song Books, he illuminates the struggle between “predestined” score and a performer’s free will, and each of the performers gave their own expression to Cage’s rather obscure score and directions.

For this production, directed by Yuval Sharon, the SF Symphony pulled out all the stops to create a staged environment containing the elements of spoken word, scattered musicians, video feed, extended vocal techniques, electronic manipulation and naturalistic acting. Their props even included a juicer, a manual typewriter and an ongoing card game.

It was a completely enchanting piece, layered and collaged out of fragments and found forms. If early detractors called it rubbish, they would also have been correct—part of it is, after all, an homage to Dada artist Marcel DuChamp, who once famously “signed” his name to a urinal and hung it in a show. Both visions and crimes could be hung on this slender framework, and when Monk sang, “The best form of government is no government at all,” one wondered if she was referring to the structure of the piece itself.

In a talkback afterwards, director Sharon described the work. “The banal and the extraordinary live very close together, and that is what gives the warm glow to the piece.” Indeed, lilting arias were accompanied by the sounds of chopping and then the whirr of a blender, as we watched a violinist prepare his fruit drink. 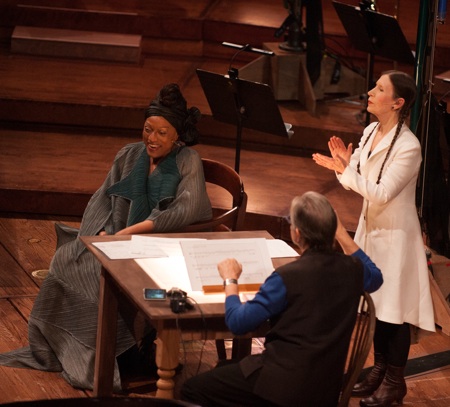 While questioning the very nature of music and the structure of a composition, Cage still had room to create a lasting work with a dramatic core.

After a long intermission (disassembling the sets), we returned for Lukas Foss’ Phorion, a delightfully outrageous decomposition of Bach’s well-known Partita No. 3 in E Major. Also making use of fragmentation, motifs travelled around the instruments, slowly crumbling into abbreviated gestures, as French horns wailed sour notes and cymbals added bright urgency. Foss’s 1967 work may have been referencing the nature of memory, with its lightning-fast flashes of association, tuneless humming, and sudden holes. It was tenuous and distracted, angry and humorous, sophisticated and brilliantly childlike, and MTT and the symphony made its contradictions seamless.

The third work was another blockbuster of the rebel repertoire, Henry Cowell’s Piano Concerto, performed with a concentrated zest by Jeremy Denk. Written in 1928, it is nearly as disconcerting today as then. This strikingly individualistic composer was, not too surprisingly, as radical in his life and politics as in his music. Bisexual in a strait-laced era, at the age of 39 he was convicted of a “morals” charge and imprisoned in San Quentin for four years, before a barrage of American composers helped to effect his release. That experience nearly broke him, and the palpable joy of his Piano Concerto was not to return to his writing for many years.

Denk described the piano part as, “a lilting percussion instrument. Between the tone clusters and the other hand you are creating a sinuous melody.”

Often attacking the keyboard with his whole forearm, Denk was both savage and surprisingly melodic. The curious thing about dissonance is that it really isn’t, and so it might be more accurate to speak of tonal density. Cowell, who in 1930 authored a persuasive book on rhythm and extended harmonies, demonstrates that vividly.

They closed with Sun-treader by Carl Ruggles, a work of molten gold and jarring brass. This piece, which Ruggles refined over five years and published in 1931, made use of unexpectedly recognizable motifs.  But the heavy-hammered timpani sounded almost untuned as it accelerated into a heart-in-throat anxiety. Slower passages of shivery winds painted glimpses of an emptier ground, against which the brass crowded back in, heavy footed. Sharp attacks, large atonal intervals and bright coloration added to the timpani arrhythmia for a work that both glittered and slapped the starch out of us.