A work of modern tone clusters and ancient tuning filled UC Berkeley’s Zellerbach Hall on Thursday, Dec. 8, with Lou Harrison’s Piano Concerto, the centerpiece of a concert by the Berkeley Symphony.

Alternating meditative and brutal, pianist Sarah Cahill performed a striking rendition that brought the audience to their feet. 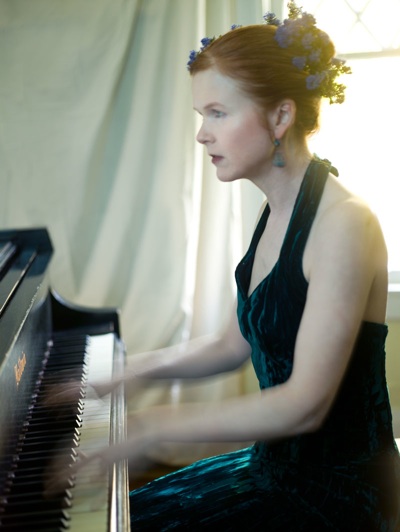 A local legend and stalwart explorer in music that spans from Ravel to American Contemporary, Cahill has studied both Harrison and his mentor, Henry Cowell. Her insight and fire have impelled many noted composers to dedicate works for her, including John Adams, Terry Riley and Fredric Rzewski. Her passion to make new works accessible has led her to create the Summer Solstice festival in Oakland’s Chapel of the Chimes and a monthly program for the Berkeley Art Museum’s L@TE Series.

She has had a long career in print and radio, including hosting “Then and Now,” KALW’s Sunday night classical program.

Conducted enthusiastically by guest conductor Jayce Ogren, the Piano Concerto is not often performed, as it requires a complete retuning of the piano. Harrison spent his life exploring music from different cultures, particularly the Pacific Rim, and in this work he combined the tonalities and modes of Balinese gamelan with the scales of Pythagoras, an adjustment that is similar to “just” intonation.

Rather than the very even steps of our present-day equal temperament tuning system, he tweaked the tones into frequencies that related to each other through simpler harmonies for a wealth of overtones.

The result held an exotic grandeur in the big orchestral moments and an eerily evocative intimacy. There was an airy quality to the chords, as we are used to the buzz of modern tuning and its compromises.

When not using her forearm, Cahill used a felt-covered wooden block for an octave-long cluster, rhythmically striking the white or black keys for sounds that were modal or pentatonic, respectively. I was fortunate enough to sit where I could see her hands, a pyrotechnic display of fast chords into which she inserted the block, which she grabbed and returned from her lap.

Harrison re-invented his themes in the gentle third section, where slow piano chords had luminous centers, relying on retuned perfect intervals. Then shivery strings swelled into romantic lines, and drifted out to leave piano notes to tease the air. It was a transcendent moment. They brought us out of reverie with a more energetic fourth movement, piquant with exotic percussion, Harrison’s other specialty. The Berkeley audience, perhaps enjoying the “home game” advantage of a local celebrity, brought Cahill out for repeated bows.

Lei Liang’s Verge paved the way for Harrison with Chinese folk scales and the interweaving lines of Mongolian long-chant. I heard the premiere of this work in New York two years ago (December 23 Piedmont Post), and was pleased to get the chance to hear it again, with its keening melodies and metallic overtones. That thin sound, sul ponticello, was achieved by bowing close to the bridge, and with 18 strings doing just that, there was a wintry menace.

They closed the program with Sibelius’ Symphony No. 5, a long exercise in pastoral textures in which one could almost hear the calls of Sibelius’ beloved wild swans or the rustle of field mice. Clarinets threaded throughout, a testament to the influence of Russian composers on Finnish culture. Despite a game attempt by all, it was a somewhat limp performance. That symphony, with its spare harmonies and complex development, is difficult at the best of times, and its lengthy romantic themes did not belong at the end of a long night.  It is difficult to believe that Sibelius wrote this in the same period as his violin concerto, a work of chiseled concision with haunting lines and deep sorrows… and one of the greatest violin concertos ever written.

Completely rewritten twice, it is possible that this symphony’s pleasant themes just did not quite fit with his stark Finnish outlook.