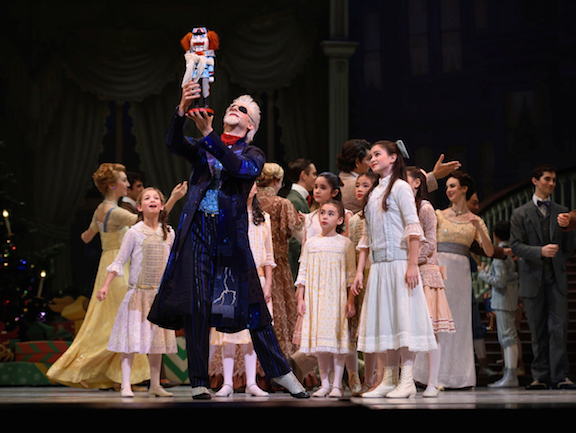 At the end of the first act of The Nutcracker, the little girl Clara is swept away into the Land of Snow. There the King and Queen of Snow dance for her, and their entourage of snowflakes, ballerinas in long white tulle tutus, pace through symmetrical patterns. As they do, snowflakes continue to fall around them, at first lightly and then so thickly it’s difficult to see the whirling dancers.

The effect is beautiful and illusory, and it is sheer ballet. For ballet, especially storybook ballet, is about the beauty of the world and the possibilities offered by illusion. Warm-blooded and muscular dancers become snowflakes, flowers, ladybugs and butterflies – a host of creatures that seem unbound from the material weight of gravity. And that has always been ballet’s goal, to unloose the human body into flight. The ballerina on her toes retains only the smallest contact with the earth, and the lightest resistance, so that she seems to spin effortlessly and balance with arms and legs outstretched as if in perpetual flight.

San Francisco Ballet has been presenting The Nutcracker since 1944, when its dancers would queue up to buy fabric for costumes during the War’s rationing. The Christensen brother’s company was the first to present the ballet in the US, and the company has never abandoned its commitment to the ballet, nor the dancers apparent joy in dancing this lovely Christmas tale from an earlier and more fantastical and imaginative century.

The current production was choreographed and directed by Helgi Tomasson in 2004. And as always there are deviations from the original Ivanov-Petipa production of 1892, which also deviated from ETA Hoffmann’s original story, but for the most part the ballet’s story remains intact, held close to Tchaikovsky’s enduring score.

No more the Land of Sweets, but the national dances remain. Spanish Chocolate is now fiery Spanish dancing. Arabian Coffee is an Aladdin’s lamp with a sinuous genie. Mother Ginger is Madame du Cirque, whose skirts nonetheless provide home for miniature Pierrots and a performing bear.

In this version Clara undergoes a transformation, stepping into a kiosk of mirrors, she spins into adulthood becoming a princess of the surrounding world of sweetness. And this reading of the story always seems true to world created. The vast appeal of storybook ballet is not only that of delight in a gracious and precise form of dancing but also in the viewer to being able to imagine his- or herself as undergoing a similar transformation – becoming the prince or princess capable of everlasting love and joy.

In SF Ballet’s opening night this year, the Grand Pas de Deux was danced by Vanessa Zahorian with Carlos Quenedit as the Nutcracker/ Prince, filling in for the injured Davit Karapetyan. Both very solid in their roles. The exquisite Sofiane Sylve danced the role of the Sugarplum Fairy, though the Sugarplum variation was danced by the queenly Zahorian. Mathilde Froustey and Carlo Di Lanno made an ethereal Queen and King of the Snow. Rubén Martin Cintas danced the enviable role of Uncle Drosselmeyer, purveyor of toys and dreams. The leads change with each performance.

And the story’s many children were wonderfully danced by the students of the San Francisco Ballet School. Anna Javier was this year’s Clara, a role she danced with freshness and elegance.

Additionally, the mezzanine store is decked out with gifts and every imaginable form of Nutcracker, and trees full of sumptuous ornaments. Treat yourself to one of the season’s most delightful – and non-caloric – events by going to the ballet!