It was mythic in more than one sense, especially the underlying mythos, the Icelandic Volsunga Saga and the Norse and Germanic Eddas. And it was a myth-making event for the Bay Area, with a new production by Francesca Zambello that weaves grand nineteenth-century German music into twentieth-century Americana. This tapestry of venal Gods and heroic mortals emphasizes the destruction of the earth, nature choked by industry run amok.

I was fortunate enough to see the first two operas in the four-opera cycle this past Tuesday and Wednesday, June 28 and 29. Wagner uses his tetralogy to test theories on opera, moving beyond the music and underlying dramatic theory of his time.

In a re-evaluation of the power of Greek opera, which was based on the fusion of the arts with a Greek human-centric religious mythology, Wagner tries to leave his Christian ethos, one which he felt devalued life and art in pursuit of the promise of afterlife, and instead drew on the ancient Norse and Germanic skalds and their all too fallible Gods. And by doing so, he hoped to reinvest opera with its ancient dramatic roots.

Das Rheingold begins with soft tension, the low thrum of bass and contrabassoon as dark clouds shift on the curtain’s scrim. The brass swell and the lighting brightens along with bright horn fifths. Then strings add swirling arpeggios and clouds morph into waves. The curtain rises on the three beautiful guardians of the Rhine gold, who tease the twisted and powerful Alberich, and thus begins a tale of power and corruption.

Singing the part of the Rhine maiden Flosshilde, Renée Tatum needed no gold to flesh out her burnished mezzo line. And after being spurned by her, Alberich, sung with rich earthy hues by Gordon Hawkins, completed the formula: “I’ll forge the ring of vengeance. I curse love.”

It is an opera of vows and curses, of Wotan’s wandering eye and sly salesmanship. And, of course, of love and betrayal.

Sung by baritone Mark Delavan, Wotan first appears reading the paper in a beach lounger. Disinterested and a little sleazy, he tries to cheat the giants Fasolt and Fafnir out of their contract to build Valhalla for the Gods. His character is conniving in Rheingold, a good match for the trickster Loge, sung by tenor Stefan Margita. Where Delavan’s baritone is world weary, Margita sings with the sweeter tongue of deceit, and earns the longest applause.

Delevan warms to godlike wrath in Die Walküre. In that opera he displays both character and vocal evolution under the lash of a disobedient daughter’s love, the Valkyrie Brünnhilde, who is brilliantly sung by soprano Nina Stemme. Though set among the trappings of war, it is surprising how much of that opera develops through intense and intimate pairings. Stemme and Delevan explore the dynamics of fathers and daughters—though not many family therapists would take on the thundering God who slays his own son, Siegmund, or the warrior maiden who defies him. Much less rings of fire, giants and dwarves, and charms of sleep!

That therapist might also have paused at Siegmund’s incestuous marriage to his own sister. But those moral dilemmas are food for the Gods and the fabric of myth.

For those new to the Ring what may have been most striking in these two operas was the fever pitch—a treacherous tale that keeps you on the edge of your seat, set to music that slowly builds tension for hours. Conducted by Donald Runnicles, who retired last year from the SF Opera but continues as musical director of the Berlin Opera, the orchestra was superlative, and the heavy brass section pulled out all the stops. Wagner’s layered shrouds of sound built and resolved with the weight of the ages. 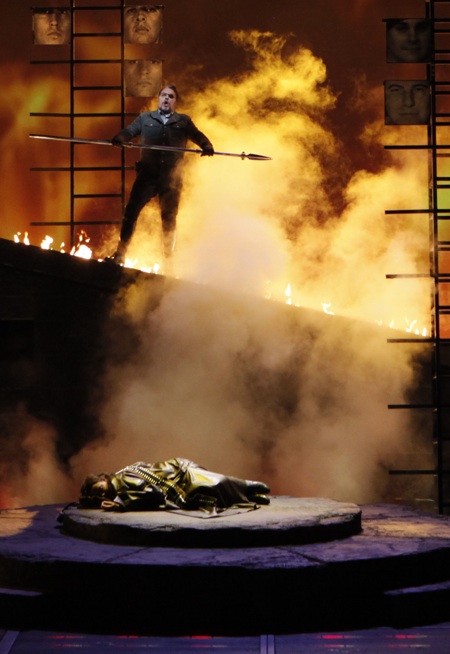 The other element of this triumph was the uniformly high level of singing. Besides Stemme’s huge and nimble soprano and great acting, Delevan’s memorable Wotan and Margita’s bright negotiation of a lawyerly gray zone, were a score of top portrayals, including Siegmund’s ringing solos, sung by baritone Brandon Jovanovich and the giant Fasolt’s grimly threatening bass, sung by Andrea Silvestrelli. Ronnita Miller added vocal heft for a believable Earth mother, Erda, and Elizabeth Bishop brought warmth to a shrewish strato-soprano line as Fricka, Wotan’s jealous wife.

If this Ring returns, I would certainly see it again.