Riding with Death on a Sunday afternoon.

At the hands of the sterling Calder Quartet last Sunday, Feb. 23, themes of death and transcendence brought a chill to a sunny afternoon. Their program, held at Hertz Hall on the UC campus, began a century ago at the conjunction of fin de siècle decadence and the birth of atonality, with Arnold Schoenberg’s formative String Quartet No. 2.

Wrestling with form when he wrote this in 1908, Schoenberg came up with a hybrid of quartet and song cycle, with the last two movements adding poems for soprano voice. He was also wrestling with context, as his wife had left him for several months, perhaps further drawing him into the dark poetry of Stefan George, whose “Litany” and “Rapture” are incorporated into Quartet No. 2.

And finally, he was wrestling with musical structure and widening his search beyond the pale of tonality. Here, the first two movements are still tonal, if dissonant, but the last two break free, presaging his later tonal liberty and reshaping the musical world.

Soprano Yulia van Doren joined them for those two movements, luscious tones carefully sculpted out of a landscape that had little to do with melodic line. But her line fit like a third violin, and, as she stood in a semicircle with the quartet members, she was careful to never overstate it.

After the nerves and fevers of the first two movements, her song—in which she begs for release from life and suffering—was almost a relief. Almost. Then she sang of a young man’s death, painted so yearningly that we found ourselves strangely worshipping his death rather than his life.

It was with relief that they moved on into contemporary, but Jörg Widmann’s String Quartet No. 3, “Jagdquartett” (2003) turned out to be even creepier. The four brandished their bows violently while shouting, “Hai!” and then jumped into a festive hunt tune, but slowly drifted out of phase into near chaos. Gradually, the listener became aware that the cello was not on the same page, and, in fact, sounded pursued by the three higher strings.

Like British composer Arlene Sierra, whose paean to Darwin’s “survival of the fittest” created an orchestra that turned on each other, Widmann sets his violins and viola into a hunt for the blood of the cello. Cellist Eric Byers turned his instrument frantic and then slowed into a horrible unity with the violins, as their sharp bow strokes seemed to feed off the slowing rhythm of his heart beat. It was so immediately threatening and went so deeply into murder, that, with very little imagination, one felt like an accomplice just by hearing the piece.

The technical brilliance that Widmann demanded was exchanged for flawless chords when we returned from intermission for Schubert’s “Death and the Maiden,” a quartet he penned in 1824 as he entered third stage syphilis, a disease that claimed him four years later at the tragically 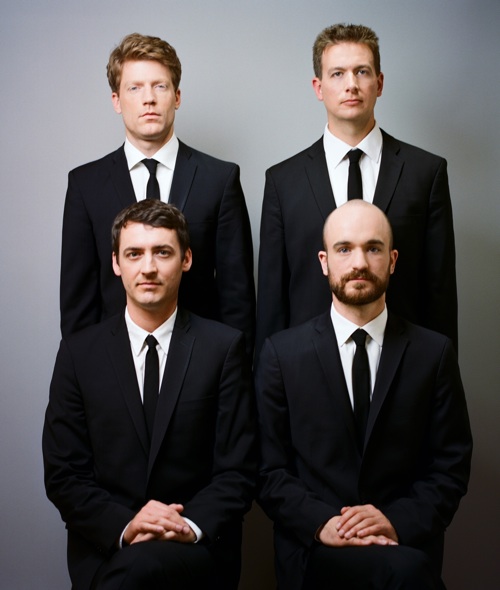 young age of 32. Unlike the hunt and struggle, here Death was a suitor. When the rhythms of dance turned to quiet hoof beats, we were made aware of the gentleness of our partner and guide, Death on his dappled horse.

The Calder Quartet came into existence in 1998 at USC as four musicians found a lasting camaraderie, and all four original members are still inspiring each other today. This is a very even-handed quartet, with little bluster or ego, and so has extraordinarily fine timing, rich and supple line, and tremendous unison attack. Violinist Benjamin Jacobson often took the higher first line, but violinist Andrew Bulbrook supplied much of the meat (literally, in the Widmann!). When violist Jonathan Moerschel added his low string to Byers’ cello, we were treated to unisons and chords that would shake a smaller hall.

This quartet’s long reputation precedes them, but Van Doren, a rising star (and a noted baroque artist), was the real surprise here, and one hopes that she returns often.