This past September, on his way home from a rehearsal of the Oresteia, Ilkhom Theater Director Mark Weil was attacked by two men and stabbed. He died the following day from his wounds, and, although there is a lot of speculation about his death, no conclusions were reached as to the identity of his killers.

Whether the murder was intentional is a question posed by many who know Weil’s work, but, for most of us, the idea that an artist could be killed for the expression of his ideas is an unfathomable one. We live in a culture in which the most dire consequence for a rebel artist is losing his or her NEA funding.

The Ilkhom Theater of Uzbekistan formed in 1976 as a renegade street theater under the Soviet regime. Since the fall of the Soviet Union and the establishment of Uzbekistan as an independent nation, the theater group has continued with its radical agenda, producing plays that layer various theatrical disciplines into complex works that question cultural behavior in complicated and provocative ways.

Its repertoire contains many classical pieces—moving from Aeschylus’ Oresteia to Pushkin’s Prophet and Imitations of the Koran to Steinbeck’s Tortilla Flat—all combining music, video projections, and dance in metaphoric interpretations. Ecstasy with the Pomegranate, however, was created Mark Weil and Dmitry Tikhomirov, directed by Weil, and shown as part of the Yerba Buena Center for the Arts series, “Big Idea: Identity Shifts.”

Set in Uzbekistan (formerly Turkistan) in 1916-1917, the play examines some of the clashes within the country as it is being culturally re-formed by imperial Russia, on the eve of the colonizer’s own revolution. 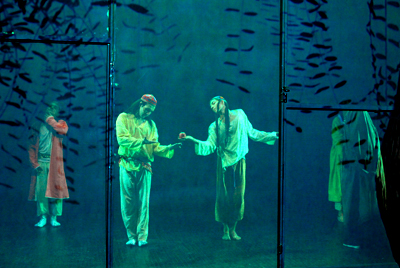 A Russian soldier who is also a painter, Alexandr Nikolayev, commits the most feared and shadowy act of colonialism: he “goes native.” He learns to speak Uzbek, converts to Islam and takes up a new name, Usto Mumin (the Quiet Master). Even his art resembles a cross between Byzantine iconography and Persian miniatures. He resigns his post and moves into the garden of a teahouse.

The four bacha dancers of the story are joined by a young girl who disguises herself as a boy, binding her breasts and cutting her hair. As she tells the boys, dancing makes her feel free: when she first put on the paradjna—an equivalent of the burqa, only made of horsehair—she felt as if she were suffocating. She realizes that by trying to be a dancer she risks death. At one point the children tell their stories, each of them fleeing a horrible life into a life that made them outcasts but gave them a home, a means to survive and a form of expression.

Finally, though, the story focuses on the rigidity of both cultures and the destructive results of their intersection, as well as the diversity of love and sexuality. The play is long, epic in length as well as text, but it has poetry, which overrides the rather dense supertitles and provocative politics. The sets are ingenious, projecting images and videos over a large paneled screen at center stage. Lighting forms a bridge between actors on both side of the screen, which in turn are mediated by images. The shifting between languages—Russian and Uzbek—gives the spoken language a richly exotic texture.