Theater, with its melding of text, performance, music and dance, has long depended on collaboration, but among artists working in forms that are most often practiced separately and individually collaboration takes on a very personal dimension. And its relationship to the audience is also less formal and more approachable. Lightfast, a multimedia performance and installation at the wonderful Museum of Design and Art in San Francisco, explores the realm of collaboration between artists. The result was a performance that was intimate, multi-faceted and elegant.

The program to Lightfast lists the elements of the piece, which can be thought of as movements, or facets, of a coherent and blended portrait of the world shared by the four collaborators.

The space Lightfast inhabited at the museum was a large rectangular room, with chairs for an audience of about 50 viewers placed in rows along one of the long sides of the room. Two sets of deciduous tree branches were suspended in diagonal corners of the room. The branches looked like they had been dipped in thick pale gray paint. The lights above them caused their shadows to fall in soft blurry pink and greenish traceries across the white walls.

The performance began with the entrance of the cellist. Scott placed herself and her instrument inside a gauzy cone of white mosquito netting that cascaded to the floor in front and to the right of the wall to the audience’s left. As the deep sounds of the cello resonated in the gallery space, a film of waves on sand was projected across most of the wall behind her. These were not the large rolling waves of surf, but waves after they have broken and become a simpler sheen of water over sand, expanding and retracting like breath.

This imagery assembled by visual artists Dillbohner and Mattes was overlaid with other less distinct patterns of grays and lights, giving the play of water an abstract and dreamlike quality. Within the pale netting, the cellist became a ghostly figure, blurred and abstract like the light on the waves. Like most of the imagery used in Lightfast, the colors used in the two films and a later series of projected stills were muted, as close to grays as possible. The deep sounds of the cello anchored the figure and images.

Later in the performance the images shifted to another wall, the waves replaced by organic forms that were familiar but not clearly recognizable. Trees, grasses. A woman’s body appearing, disappearing, and reappearing seemed to float among the layered images. No story was told, instead emotions were evoked. There was no need for explanation of the beauty of the imagery or the sounds of the music. Instead, they formed an environment that was tender, meditative and nuanced. 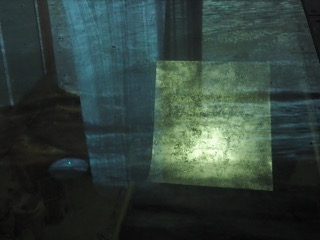 Into this shadowy and palely abstract world walked writer Brownrigg. In four monologues spaced in between shifting abstractions of music and image, she talked about the mysteries of family and life on our green and blue planet. About light and dark and silence: “It is not that the shadow knows, it is that the shadow speaks.” And finally, she talked about following a path, a trail where children, adults and elders walk, through a forest, across a dry river bed of leaves, accompanied by the music of heat and insects.

The museum’s space favored the cello over the spoken voice, but even so, the human voice has a music of its own, its words composed of a palette of sounds that, like the projected images, is subtle and serene.

All performance is ephemeral, disappearing even as we watch. However, Lightfast has been recreated in book form, both as a large format artists’ book and as a chapbook. The chapbook is available at the Museum of Design and Craft. Videos from the performance can be found on YouTube at https://m.youtube.com/playlist?list=PLHvdJYFqI4Ve3kLVy3Jo48GAjq6bqRYnj