Musicians soar, Halloween costumes and all 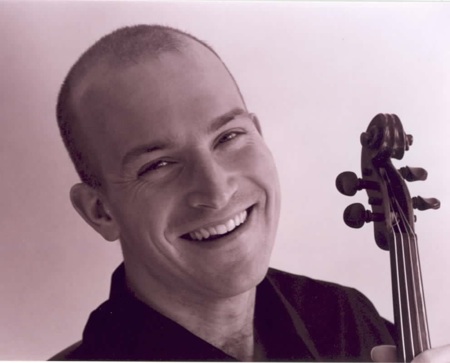 Violist Nils Bultmann was fearless and tender in Bloch’s Suite Hébraïque for viola and orchestra Saturday night on the UC Campus. But the setting was a little unusual.

A policeman, a surgeon and a cat walk into a concert hall… No, this is not the beginning of a joke. It was Hertz Hall on Halloween night, where the UC Symphony Orchestra tackled heavy material with both concentration and light-heartedness. Top hats and green hair leavened their formal attire, and though Groucho Marx on timpani was surprising, the banter did little to detract from their unity.

And Bloch and Rachmaninoff showed them at their best.

Ernest Bloch wrote his Concerto Grosso for string orchestra and piano (1923-4) to show his pupils at the Cincinnati Conservatory how 20th century music can be written utilizing older forms, and to prove it he drew heavily on Bach for the Prelude and final fugue.

David Milnes, whom I’ve heard in several capacities over the years, including conductor of the SF Contemporary Music Players, led the large student orchestra with energy and style, appearing to cheers in a red cape.

Rather than the rougher sound of novices, they exhibited a round center and fine edge, tuning with the keen ear and fast synapses of youth. This work is often performed by younger orchestras, which play the unison phrases with verve, while the virtuoso piano part is played by one more accomplished, in this case by Jacqueline Chew, faculty member and Messiaen specialist. The delicate Chew brought heft to a line meant to represent the continuo on steroids, jolting herself off the bench with the force of her chords. It was grand and disturbing music, a perfect prelude to Halloween.

The melancholy Dirge descended in paired “meows” of strings, with a lovely violin solo by April Paik, and then concluded in long and lovely decay. The third movement Pastorale held clarity in each line, opening with Eastern European Scherzo and turning strangely Midwestern. Bloch’s tribute to his adopted Ohio had a recurring theme as forthright and timeless as corn. Then his themes moved across the strings in a fugal vision, shifting to minor with the piano.

After a bow, the usually unflappable Milnes flapped his cape as he left the stage.

Nils Bultmann, a violist and composer presently in a PhD progam at Cal, arrived in a golden mask, but had to lift it to see the conductor. Horns, winds and percussion joined the strings, among them Dracula, a zombie and various critters with prominent ears.

Bloch wrote Suite Hébraïque a quarter century after Concerto Grosso using modes and material gleaned over a lifetime. Returning to his early exploration of Jewish music, he reinforced the Hungarian Gypsy scales with lilting rhythms, the iambic sound of Hebrew prayer.

Basses opened with a stern phrase, and Bultmann followed with heartfelt descending figures. The viola, a mid-range instrument, is easily hidden in the backbone of orchestral color, but Bloch’s careful balance and Bultmann’s formidable richness allowed him to soar. Tossing off fluid runs and occasional double stops, he left fireworks behind for a meatier stew, seeking the heart of a culture. Bending notes and bowing under the pitch, he coaxed out an ancestral village sound.

“Processional” had the stately pace of a New Orleans funeral, neither death march nor celebration. Viola rode over the plucked strings with rhythmic flourishes. Then, in “Affirmation,” Bloch starts in a modal key, but leaves the perfect fourths of Eastern Europe for clean but uninteresting fifths, perhaps his flirtation with Neoclassicism, for a curious finish.

After intermission Milnes pulled off Sergei Rachmaninoff’s huge Symphony No. 2, an exercise in stamina. Basses intoned the solemn opening, deftly led by Stephanie Verrell in something black and slinky with a fuzzy tail.

Along with tight strings were notable English horn solos and some beautiful clarinet and oboe passages. The well-known Adagio felt fresh, and the finale held some glorious unison moments. These young musicians may not have developed their full power or poise, but one was quickly immersed in their darkly exuberant material.

Although one thought lingered. Who was that masked trombonist?