At some point in life the desire to leave the familiar behind in exchange for the unknown has seemed liberating. But some discover that the grass is in fact not always greener on the other side, and escaping is not the answer to misery. Such is the story of French post-impressionist painter Paul Gauguin.

As Gauguin’s story unfolds, it becomes clear that he is dogged by constant failures and an inability to fit in anywhere. Unable to prevail as a successful artist, he seeks work that denies his true inner voice, resulting in even more failures. Adoniou’s representation of the conflict between Gauguin and his inner voice is masterful in its portrayal of mental anguish.  As Sulker draws near to Froehlich, her umbilical-esque cordon coiling around her, the audience sees the literal connection between conscious and subconscious.

One of the musical highlights of the production is during Gauguin’s visit with Vincent Van Gogh in the south of France, where he is inspired by the naturally existing colors of the countryside. A Spanish- style guitar melody meanders alongside a projection of Gauguin’s paintings. The scene reaches a climax with the three narrators joining Froehlich and Sulker in song, the orchestra painting a wall of sound to compliment the projected paintings.  It is here that Corlone’s music shines, invoking comparison to Debussy; watery and full of movement, with sprinklings of contemporary sound. 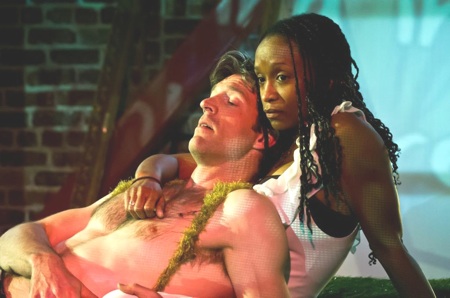 Upon returning to Paris, Gauguin finds life in the city unbearable, and embarks on a trip to Tahiti to escape the scramble of city life. Some of Gauguin’s most prolific paintings are created in Tahiti, notably nude studies of Polynesian natives and scenes of island life. Alas, life in Tahiti is not the simple, free, happy existence he envisions.  After going broke and suffering a heart attack, he returns yet again to Paris.

Again Gauguin receives less than stellar critiques of his artwork, and suffering a crisis of confidence, decides to return to Tahiti at least to be free again. It is during this second stay on the island that he reaches notoriety for his artwork in Europe.  He also paints one of his most renowned paintings, Spirit of the Dead Watching, which projection designer Jeremy Knight has dissected section by section to accompany the lyrics Froehlich sings, explaining his artistic process.

Altogether an engaging performance, this production boasts an excellent chamber orchestra and superb vocalists and dancers. The sparsely furnished stage set allows the vibrant colors of the paintings and the costumes to shine.  The multimedia presentation helps move the story along and is an updated way to present supertitles. Froehlich is truly a triple threat (singer, vocalist, and dancer) not to be missed and the beauty of Sulker’s voice left me wanting to hear more.