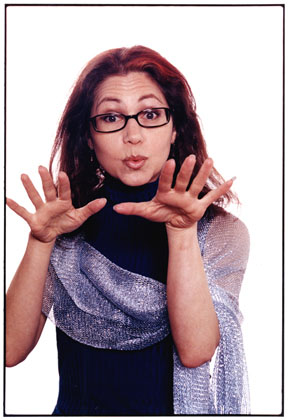 Both Amy X Neuberg and Juana Molina use electronic and acoustic instruments as support for their vocal lines, creating real-time loops along with other synthetic techniques to layer textures of sound, and both approach the voice as a flexible instrument with a variety of vocal techniques that can produce a wide range of just plain sound, separate from the needs of text.

The sound fields these two composer/performers create are very different, and that difference can be characterized as cultural as much as individual.

Amy X Neuberg, introduced as San Francisco’s cabaret diva, opened the concert with selections from The Secret Language of Subways, a 13-song cycle that she conceived of while “sitting on the subway” in New York and that she describes as “the fragmented meanderings of my thoughts.” Accompanied by the cello trio called the Cello Chixtet, Neuberg both sang the songs and tapped out the electronics necessary to overlay her voice into harmonies and counterpoints. For each song she programmed 12-drum pads to create pitches or effects.

The final mélange resembles the text of her songs, which are self-aware meditations on life and art: highly polished, ironic and pleasing. The smoothness of the synthetic sound and its overall fullness is very, well, New York. And it syncs well with text such as “if I say nothing, then nothing can deceive” and “the weather’s fine, the wine’s divine, the cat looks OK.”

The exotic electronics of Juana Molina

Juana Molina grew up in a musical family as the daughter of the beautifully voiced Argentine singer Horacio Molina, and she first learned guitar at the age of five. But it was more than music that engaged her as a child—it was sound and its potential as music. In one interview she talks about the noisy elevator at her grandmother’s house. Imitating the roar of the elevator, she goes on to tell how she always wanted to ride the elevator alone so that she could sing with the noise as accompaniment.

Using a guitar and a synthesizer, Molina lays down repeating loops of phrases of four or more notes. Because of syncopation and the shift from loop to loop, the first note of each repeating cell is placed differently in relation to the other repeating cell, so that the texture in any given song is constantly shifting.

Likewise, Molina seems to have a preference for dissonance and unusual chords, both of which add intensity to the shifting note progressions.

Over these very dense layers, Molina sings her songs.

Written in her native Rioplatense Spanish, the lyrics are hard to follow for the less than fluent speaker. But she drolly remarks that that doesn’t seem to matter, finally. And perhaps it doesn’t.

Molina favors several vocal techniques, among them the hard voice often used in ethnic folk songs and the contrasting wispy style used by Antonio Carlos Jobim. The overall effect is edgier than the style of Neuberg’s compositions and has a more concentrated vocal delivery and an exotic rhythmic drive. Perhaps even more interesting is the clarity with which Molina’s performance allows us to see how her compositions are developed. If she misses an entrance and doesn’t like the way one track relates to another, Molina will start over again. Quite a difference from our American sense of musical professionalism, but one that allows her an improvisational freedom and an organic relationship to sound.