A very cool thing happened on Saturday, January 14, at Davies Symphony Hall. Michael Tilson Thomas and the San Francisco Symphony pulled off a major culture point of the year—which is surprising, with the year so young. But major it was, and it deserves to be remembered.

Claude Debussy’s Le Martyre de Saint Sébastien, originally clocking in at five hours, is rarely performed. But Debussy’s music deserves a place in the lexicon, and this spectacle of music, dance, drama and spoken word is more often abridged to just over an hour. What we heard sacrificed little of the music but much of Gabriele d’Annunzio’s sometimes-turgid prose.

Along with the SF Symphony, the mighty SF Symphony Chorus, four soloists, chilling narration and effective videos together created a spell that probably improved on the original tale of a Roman soldier turned Christian martyr. The narrator, Frederica von Stade, is better known for a lifetime singing with the Metropolitan Opera, and her husky contralto and liquid French diction added depth to the spoken text, the voice and prayers of Sebastién.

Among the soloists mezzo-soprano Sasha Cooke was a standout, delivering opulent whole tone series as she sang, blue-lit, on a platform 12 feet above the stage. Her duets with mezzo Leah Wool delivered subtle and luminous harmonies, a trademark of Debussy’s impressionist writing.

“My brothers, I hear

the sound of breaking chains…

the leaven of terrible hope!

My brothers, I hear the melody of the holy struggle,

the divine choir of the seven plagues,

the birth of planets…”

Those elements were supported by separate women’s and men’s choruses, with the tenors in particularly fine fettle, all carefully bracketed by the Symphony’s excellent musicians. Much of the time they strove for careful blends, an exacting duty, except in two brass fanfares.

And that dovetailed nicely with the first half of the program, where they traded restraint for joyful music making in Leos Janácek’s Sinfonietta. Written after his homeland, Czechoslovakia, declared independence from the Austro-Hungarian Empire, Janácek filled this paean with golden hues and big brass to celebrate the end of centuries of foreign Hapsburg rule.

Three trumpets were positioned on each of three tiers, above the back and two sides of the stage, and from that vantage they blew a shimmering lens of sound. The effects included a marvelous near-drowning experience and then softened to complex rustlings throughout the orchestra.

The third movement, a “garden” of quiet turmoil, was accented by some very difficult flute work, soaring and explosive runs. And then the brass returned to impel the whole through the “Street” movement and slowly built to a massive restatement of the introductory theme. 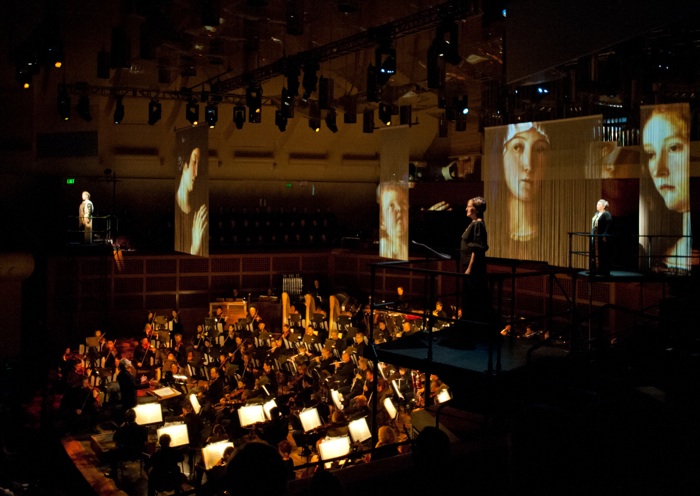