Nicole Paiement and Brian Staufenbiel rekindled their magic last weekend at San Francisco’s Z Space, with an unsparing production of Leonard Bernstein’s fraught suburban Trouble in Tahiti. This real-life couple is the creative powerhouse behind Opera Parallèle, Paiement as conductor and artistic director and Staufenbiel supplying the concept and stage direction.

After a triumphant season that featured Osvaldo Golijov’s eulogy on the Spanish Civil War, Ainadamar, they turned to a pointed analysis of suburbia. Written in 1952, Trouble in Tahiti calls for broad American accents, Bernstein’s signature blend of operatic and big band, and even a jazz trio. It is a dream and a promise of Americana, but also a lament for the emptiness of material striving.

Staufenbiel and Paiement immerse us in the land of kitsch and martini shakers, of big cars and white flight, with a rotating set and three video screens. A red Formica kitchen table with metal edging rotates along with an analyst’s couch, an exercise bike and three rows of theater seats. This procession of scenes yet to come creates a sense that the future is circular, and freights the present with futility. On the screens flash Chesterfield and Lucky Strikes ads, Packards and Oldsmobiles and old rotary dial telephones. At times, enlarged details of phones dominate the set, a coded communication for the lack of that in the strait-jacketed lives of an American couple.

Bay Area favorite Eugene Brancoveanu, a warm-voiced baritone with an out-sized instrument, played the husband, Sam, against mezzo Lisa Chavez as Dinah, the desperate housewife. Chavez, inspiring in a pants role as Lorca in Ainadamar, was also well matched vocally with Brancoveanu, bringing her own sturdy riches into play. But in her quieter soliloquies, such as “A woman needs so little,” she seemed to reach each member of the audience privately, lithe velvet vocals over bass clarinet fifths and deeply bowed bass pulsations.

A trio of singers purred, scatted, and uttered cheery homilies to bracket each action. Krista Wigle, Andres Ramirez and Randall Bunnell were genuine gold here. One only wished that, rather than pretending to sing into a mike while belting out to the rear seats, the three really did have that mike turned on so we could here every husky jazz innuendo. 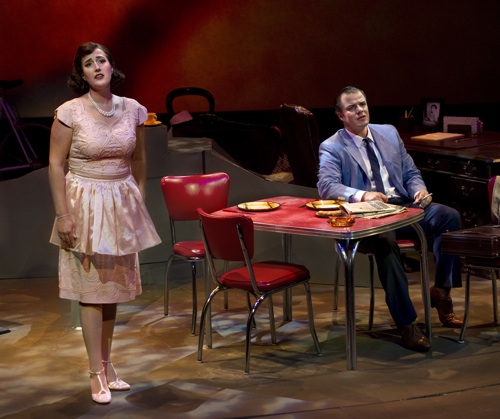 Bernstein is at the top of this form when he contrasts simultaneous scenes, as in Dinah on her therapist’s couch dreaming of a garden, and Brancoveanu chatting with his secretary. The vocal lines interwove across sets and genres for an effect like the buzz of tight dissonance.

Cutting across the despairing lives of Sam and Dinah came an unexpected internal movie, “Trouble in Tahiti,” from which the opera is named. Its stars are the real cast, but dressed in grass skirts (Dinah) and Navy duds (Sam) and superimposed on a coral atoll. It forms a manic backdrop as Chavez sings a solo that wavers between scorn and longing.

Chavez and Brancoveanu end with a duet in which they pray that “one day, without the dark dollar, without the screaming silence… ” they can restore their love. But against a tableau of alienation and angst, Bernstein leaves it as a thin hope.

As this opera clocks in under an hour, the program was preceded by Samuel Barber’s fifteen-minute Hand of Bridge, using the same cast. Also set in the fifties with libretto by Gian Carlo Menotti, the players, two married couples, took turns revealing their hidden fantasies to the audience. It was appropriately stifling and played off beautifully as a preamble to Trouble.

If Bay Area audiences enjoy being spoiled by top-notch talent and bold concepts, they will continue to support this multi-award winning company. Their fall season starts with a fundraiser, the private performance of Jake Heggie’s At the Statue of Venus, a solo by soprano Kristin Clayton with Heggie as pianist. This amusing spoken/sung reflection on love and blind dates will be held October 24 from 6:30 to 9:30 p.m. at the General’s Residence of Fort Mason in San Francisco. Information available at operaparallele.org.

Photo of Eugene Brancoveanu and Lisa Chavez in Trouble in Tahiti; photo by Steve DiBartolomeo.